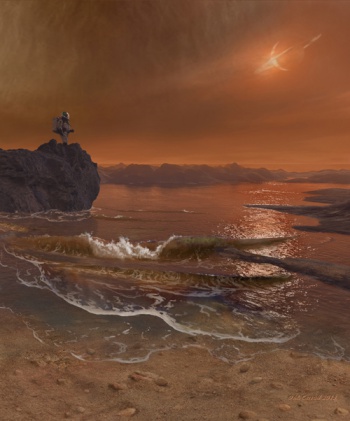 Looking for a great vacation destination? Let NASA's Chief Scientist take you on a guided tour of one of the most extraordinary travel spots in the Solar System!

Titan's nitrogen-rich atmosphere, coupled with its flowing rivers and vast seas of methane and ethane, have earned it a reputation for being the most Earth-like world in our neighborhood, but Dr. Ellen Stofan walks us through the alien sights, sensations, and even smells of this faraway landscape.

Summer's heat and humidity make you long for lakeshore breezes. Where's the camping gear? Erie and Superior sound like fine destinations, but you're looking for someplace more exotic. How about Kraken Mare on Titan, Saturn's largest moon? It's nearly twice the size of all the Great Lakes combined, boasts nice breezes and small waves - if you can manage the colder temperatures - plus views your family won't believe when they receive your postcards. But how to know which sights to see and which to skip? Meet Dr. Ellen Stofan, whose official title at NASA is Chief Scientist, but who is also an excellent tour guide for Titan.

Dr. Stofan grew up with a science teacher for a mom and a NASA engineer for a dad, so it was nearly a done deal she'd be a scientist. Her research compares and contrasts the composition and life cycles of rocks, oceans, and atmospheres among the planets and moons in the solar system. Dr. Stofan has worked on the Magellan mission to Venus, the Mars Express mission, and the Cassini mission to Saturn. She's currently the principal adviser to the head of NASA, a role showcasing her scientific skills and flair for public outreach.

Dr. Stofan's comments on the surface conditions of Titan should help you choose your camping gear. Titan is "rather benign," she says, compared to environments like Venus. The surface pressure is higher than Earth's, but "it's not so bad for humans; you could stand up and move around." Walking on Titan's surface feels like walking under 5 meters (about 16 feet) of water on Earth. But the view will more than make up for it: on Titan, hazy, smoggy days are the norm, not the anomaly. Imagine a bad pollution day in one of Earth's larger cities, haze obstructing your view but not obscuring it - and then imagine the haze with orange highlights, washing out objects like a sepia photograph washes out colors, but replacing that brown tinge with a cheerful carrot hue. You can see for miles, but everywhere you look, it's tinted apricot. You have to bundle up for the cold on Titan, though: at the surface, it's 94 Kelvin, which is nearly 290 degrees below zero Fahrenheit. You'll definitely need the heated space suit stuffed in the back of your closet (not to mention its extra battery pack).

And now that you've got your luggage settled, what's on Dr. Stofan's list of Titan's sights not to miss?

Dr. Stofan's favorite sea in the north, Ligeia Mare (pronounced lee-JAY-uh MAR-eh), is a polar lake with over 2,000 kilometers (about 1,200 miles) of shoreline for picnics and backpacking. The lake's edge is rocky and steep, a good place to put to use all that rock climbing practice. Gazing down at the liquid, you see Titan's summer wind picking up, rippling the ethane, methane, and propane that fill Titan's lakes, boring you a bit by looking exactly like lakes on Earth. (Although your nose would know different, recognizing the alcohol and vanilla molecules you can't see.) The waves are too small for surfing, but after you carefully lower yourself down the cliff and into the liquid, you paddle around. You lean back and snap a selfie of Ligeia Mare lapping at the seams of your spacesuit.