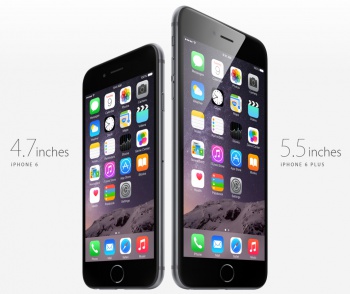 Apple had quite the day on Tuesday, announcing a whole mess of new hardware, software, and a payment system that will (eventually) help you ditch those plastic money cards populating your wallet.

So how does all the news break down? Here's what you need to know, in order of importance and immediacy.

Apple announced two new smartphones on Tuesday: The iPhone 6, and the iPhone 6 Plus. Both phones have the same 64-bit Apple A8 guts, the same M8 motion co-processor, the same revamped 8 MP iSight camera on the back (and 1.2 MP FaceTime shooter on the front). They both come in 16 GB, 64 GB, and 128 GB flavors, and both have 802.11ac WiFi compatibility.

They both have the same new rounded body design, perhaps lightly inspired by the iPhone 2 and 3 of old in shape (but thinner), while using the aluminum and glass you've come to expect in an Apple product. It's a pretty mix, it is.

Apple is a true leader in hardware in some categories. When it comes to cameras, the latest iPhone model is always near the top of the heap, or on top itself. The same can be said in design and materials, especially now that every other flagship smartphone is finally going the aluminum route (the Samsung Galaxy Alpha being a prime example).

The iPhone's display is the middle ground. The end result always looks pretty, but the iPhone 6 and 6 Plus aren't exactly pumping out the pixels. 1920x1080 is the norm, now, yet the iPhone 6 comes in at an odd 1334x750 resolution. Only the "Plus" model offers 1080p. Every similarly-priced Android offering is using 1080p as a baseline, while some are kicking up to 1440p.

And then there are the categories where Apple has taken a decidedly "Wait and See," approach. This is largely in the radio department, including the likes of 802.11ac WiFi, NFC, and VoLTE. Support for voice over LTE, or VoLTE, is big for Apple, and really big for wireless carriers in North America. Traditionally, phones have passed voice call data over 3G networks, be it GSM or CDMA. But it's an aging method, and VoLTE puts voice data on the same 4G LTE network as the rest of your data. This means the data that is your voice traveling through your phone is treated like the whatever data your Facebooks and Twitters and Internets are pushing over the network.

The two big advantages to VoLTE? Not only can you use data/apps when making a call when not on WiFi (this is more for the Verizon/CDMA crowd), but you can also make calls over WiFi. The latter is something Apple was aggressive about in its presentation, so expect most of the US carriers to hop on this VoLTE bandwagon, and quick (although it's worth pointing out that only T-Mobile will support the feature at launch next week).

Regarding NFC? Such chips allow your phone or other device to communicate with - you guessed it - another device. But it does so without having to set up some sort of long-standing or temporary network, like WiFi or Bluetooth. NFC is how Android Beam works, for example.

So Android phones have been rocking NFC for years. But here's the key question: Who cares?

What good has NFC inclusion done for Android phones? Android Beam is a neat feature, but is it one you use often? How aggressive has Google been with contactless payments? How have app developers pushed the NFC envelope? It's a nifty technology, but it's one that Android users (myself included) haven't really used.

The addition of NFC to Apple phones means the other half of the world should now be properly motivated to use this close-quarters communications goodness. NFC is a big deal for Apple, because it helps with Tim Cook's grand strategy of...