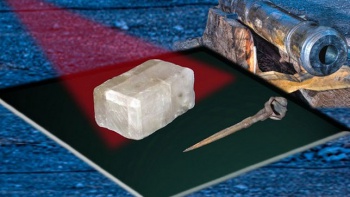 A protracter or measuring device of some sort? Perhaps in a sense. But think bigger: This is the Uunartoq disc, discovered in 1948, which researchers strongly suspect was a Viking compass.

The magnetic compasses we're familiar with today were used in China around 200 BC, but didn't make an appearance in Europe until roughly the 12th century. So how does this one work if it doesn't use magnets? Apparently, the Viking version worked the same way as your average sundial, which used a now-lost central pivot to signify directions. But the really cool bit is that researchers suspect a few tweaks may even have allowed the Vikings to navigate after sunset, when there was barely any light to work with.

You see, ancient Viking lore refers to crystals (dubbed "sunstones") which aided in navigation. When a pair of crystals are held up, the light patterns they display could pinpoint the position of the sun, even once it's below the horizon. At that point, a specially designed wooded slab on the compass would point to where that shadow would form if the sun was in the sky.

If true, that certainly explains how the Vikings were able to navigate the ocean when magnetic compasses weren't common at all. Not that the rest of Europe was especially impressed once the Vikings got there.