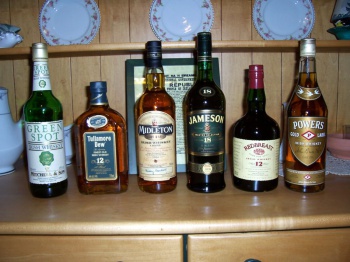 A beautiful piece of artwork, rendered using nothing but dark colors? Not exactly. That's Glenlivet 162, a type of whiskey that happens to be quite beautiful when you let it dry and stick it under a microscope. I'm not entirely convinced even whiskey drinkers would describe whiskey as beautiful, but that's exactly what we've found ourselves with here.

It also turns out there's quite a bit of science happening behind the scenes. It all starts when researchers place one or two drops of whiskey in the bottle of a glass, then give it time to dry. Since whiskey is basically a combination of ethanol and water, the ethanol evaporates first. But since whiskey has a fairly high ethanol concentration, the mobility of its receeding contact line is also high. In ordinary human speak, that means whiskey tends to pick up groups of particles that will be left behind after it dries. For example, barrel aged whiskey will pick up traces of wood from its barrel that will be deposited into the drying pattern.

To the average person, this creates really cool images and explains those unique patterns seen at the bottom of beer and wine glasses after they've dried (this can happen with any alcoholic drink after all). But what's more is that there are practical applications as well, specifically for industries who make thin films of particles with very specific patterns. Yes, there's an impressive amount of science in your whiskey, both before and after you finish the glass.