2015 has arrived, and with it the tide of New Years' resolutions that are sure to be broken or abandoned in its first few months. I'm still deciding on mine (perhaps something about procrastination), but no matter what I choose, I know I need some way to define success. Resolutions fail for many reasons, but not having any way to measure how you're doing can quickly end your promise to be kinder this year.

Systems of measurement, and accurately communicating those measurements, are a vital part of science. A lack of understanding of concentration measurements has fueled public confusion and fear about vaccines, and even highly trained scientists make measurement mistakes. In 1999, unit conversion errors led to the loss of NASA's Mars Climate Orbiter. Being aware of the pitfalls of measurement makes me especially uncomfortable whenever someone proposes one of the most common New Years' resolutions: weight loss. Discussions about obesity today often focus on the "ideal weight" for your height, which, whether you know it or not, comes from the body mass index, or BMI. The World Health Organization uses BMI when it reports about worldwide rates of obesity and to define categories of being over- or underweight. All you need to calculate BMI is your mass and your height, making it easy for governments or research bodies to use to talk about countries and worldwide trends, but for individuals it's a really poor way to talk about weight and health.

Let's explore why, exactly, you shouldn't use BMI to measure your 2015 fitness goals; it all starts with a sordid past you'll find hard to believe... 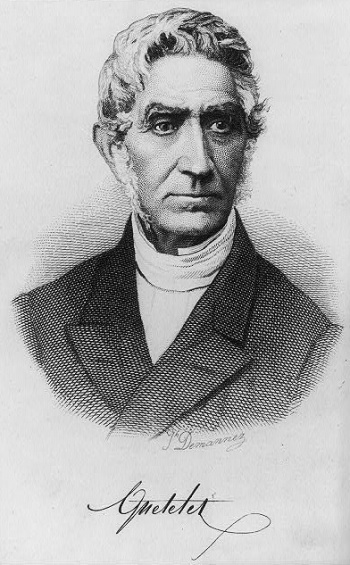 The first people to really become concerned with obesity as a health risk were 19th century insurance brokers. Prior to that, being heavy was largely regarded as a sign of good health. Fat is an advantage when food is unreliable, but carrying extra weight can increase a person's risk of hypertension and heart failure, diabetes, sleep apnea, osteoarthritis, and limit mobility and enjoyment of life. Insurance brokers noticed a correlation between their heavier policy holders and early death, so they began developing tables of average heights and weights to use when selling insurance, an early application of statistical methods. That's right - the earliest versions of the BMI charts we use today were first conceived as a money-saving effort by insurance brokers, not doctors.

Describing weight got a little more sophisticated in the 1830s with the help of Belgian polymath Adolphe Quetelet. Quetelet (1796-1874) was very interested in the growing field of statistics, and in how a representative sample can be used to draw conclusions about a population. He studied people, their physical attributes and demographics, and used mathematical analyses to draw conclusions about the "normal man." His studies, published in 1835 in a book title "A Treatise on Man," is considered by many to be the founding of the social sciences. Quetelet's application of statistics to social conditions inspired many other scientists, including pioneering nurse Florence Nightingale, who used Quetelet's statistical methods to argue for changes in nursing practices.

In "A Treatise on Man," Quetelet considered the development of weight and height from childhood to adulthood. He states, "If man increased equally in all dimensions, his weight at different ages would be as the cube of his height." In analyzing his data, Quetelet considered three ratios: weight over height, weight over height squared, and weight over height cubed. Queletet concluded that, for in the populations he had studied, body weight was proportional to the square of the height, and that ratio became known as the Quetelet Index. While Quetelet wasn't trying to describe obesity, his Index was a useful way to describe populations and make predictions about health risks because it helped account for differences in weight due to height. This was a powerful tool for the development of modern medicine, but it wasn't intended as a guide for an individual to use to measure his own fitness level.