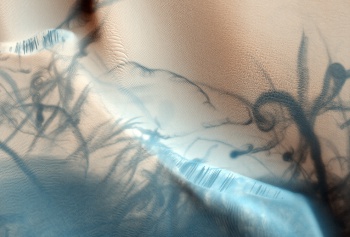 A dust storm as viewed through a screen door? Well, I suppose it is dusty but otherwise you're pretty far off - this is the surface of another planet viewed through a satellite. Specifically the planet Mars, giving us a Google Earth-esque view that shows dust devils passed through the area.

The photo was taken by NASA's Mars Reconnaissance Orbiter, which has orbited the planet since approximately 2006. While it's not offering the same coverage as satellite networks can here, it's been able to capture impressive images roughly 187 miles above the surface. In fact, the satellite is expected to transmit more data than all previous planetary missions combined, and will even serve as a relay for future space missions. From that perspective, this satellite is absolutely giving us its money's worth.

One thing the MRO enlightened us on was details of Martian weather patterns. Even if it doesn't have life, this "dead" planet still has seasons and wind patterns that alter the surface. This specific image presents trails left behind on sand dunes after dust devils came through. What scientists weren't sure about was the dark streaks along the dune edges, one reason why NASA ended up crowdsourcing its research to the public. Despite being in our skies for all of human history, I guess there's still countless mysteries about this nearby planet.