The Atari Jaguar surprised many when it appeared in 1993. Atari still made consoles? Atari's last stab at the console market had been 1987's Atari XEGS, a glorified repackaging of one of Atari's cheaper lines of home computers. The last Atari console anybody had heard of, the 7800, dated back to 1984. The last Atari console anybody liked had come out in 1977. The handheld Atari Lynx seemed like the last pitiful vestige of a dead empire, Trebizond to the Atari 2600's Rome.

(All 12 year-olds thought in metaphors based on Byzantine history in 1993. The American education system was better back then.) 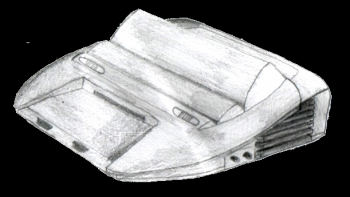 That's where the Atari Panther comes in. Or didn't.

The 32-bit Panther began development alongside the 64-bit Atari Jaguar in 1988. It was intended to have a 1991 release date, allowing Atari to compete directly with Nintendo and Sega in the home market with a system that would, at least on paper, be significantly more powerful than the Super Nintendo or Sega Genesis. A few years after that, the Jaguar project would come to fruition and Atari would follow up the Panther with an even mightier system.

Perversely, the Panther - and Atari's chance to remain a serious presence in home gaming hardware in the early 90s - was killed not by failure, but by success. The more powerful Jaguar was expected to take considerably longer to develop than the Panther, naturally enough, giving the Panther a comfortable period of time in the sun before being eclipsed by its successor. Instead, the Jaguar's development went so well that its expected completion date moved up significantly, spurring Atari to drop the Panther and focus all its efforts on the more powerful system. Thus, Atari's reentry to the console market was pushed from 1991 to the end of 1993.

At least three games were developed for the Panther prior to its cancellation: Cybermorph, Trevor McFur in the Crescent Galaxy, and Raiden. All three were quickly converted into Jaguar games - in fact, the first two constituted the Jaguar's entire launch library. So the first two games to show the world the awesome power of the 64-bit Jaguar were actually ports of 32-bit games!

Would the Panther would have made a bigger splash in 1991 than the Jaguar did in 1993? (Insert your own joke about the unintentionally hilarious shape of the Jaguar's CD add-on here.) Perhaps not. Along with its launch library, another hand-me-down the Jaguar inherited from the Panther was its infamous controller, an ergonomic nightmare that looked like it was spawned after a drunken Sega Genesis controller impregnated a typewriter, The launch titles passed on to Jaguar wouldn't have exactly set the world on fire even in 1991. And aside from the 2600, Atari's track record regarding game consoles is not very encouraging. Still, you never know. Had the Jaguar taken longer to develop, perhaps we'd all be playing Pac-Man's gritty survival horror reboot Pac: Harvest of Souls on our Atari Ocelots today.