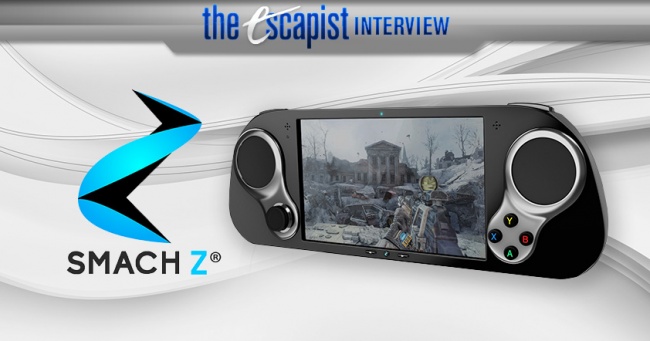 At one time, dedicated handheld systems were a major force in gaming. The PSP sold as many units as the PlayStation 3 and Xbox 360. The Nintendo DS surpassed it by leaps and bounds, second only to the PlayStation 2 in the console market. The message for publishers was clear: Handheld gaming was a major market, one the Triple A space could do well to invest in.

Then the mobile gaming market surged past everyone's expectations, including Sony and Nintendo's. A generation later, the PS Vita and 3DS are lagging far behind their handheld peers. It's reached the point that Nintendo's NX was rumored to feature Android support. In other words, if you're going to market a new dedicated gaming handheld in 2015, you're either insane or have an incredible edge.

Enter the SMACH Z, a new dedicated gaming handheld whose Kickstarter launched last week. What does it provide that other mobile platforms cannot? As it turns out, the SMACH Z is a third-party Steam Machine, automatically unlocking entire libraries of PC games for anyone with a Steam account. That's the kind of edge that just might work - if it can secure its Kickstarter funding.

"We've been working on the project for almost two years, and in this process we have built several prototypes," SMACH Z co-founder Daniel Fernandez told The Escapist. "To pass to the next development phase, where the final industrial prototype will be manufactured, we need a bigger investment; that's why we're running this Kickstarter campaign."

Fernandez first announced SMACH Z under the name "SteamBoy" in June, 2014. It's obviously undergone a rebranding, and the hardware specs have been tweaked slightly, but the concept remains the same - bring SteamOS to a mobile device complete with a trackpad control scheme. If it works as advertised, any Linux game meeting its hardware requirements will be playable, including those which traditionally use a mouse and keyboard. But while the SMACH Z will use SteamOS, it's not a first-party Valve product - and as such, is being produced independently.

"SMACH Z is a third party," Fernandez said of his team. "For the moment Valve only has provided information and access to the Steam Machines developers site. Also, they asked us to change our original name SteamBoy to [not] include the word Steam. Of course, we hope to have more support from Valve if the Kickstarter campaign succeeds."

On paper, it all sounds fantastic. What gamer wouldn't want to access their Steam library while traveling, connecting to online matches using built-in WiFi support? Even if you're starting a new Steam account, having access to hundreds of games at launch is a major selling point, something Kickstarter consoles like the Ouya couldn't achieve. Even keeping to handheld examples, the PS Vita suffered from a lack of backwards compatibility, and a less-than-stellar launch library. Ideally, the SMACH Z can focus entirely on hardware without worrying about any problems on the game development front. And if you're not a fan of trackpads, SMACH Z even features optional D-Pad overlays used to replicate classic gaming controls.