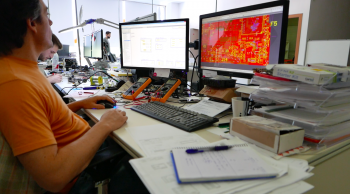 But the SMACH Z is not without some valid concerns. Certain advertised games, such as Bioshock Infinite and SOMA, have benchmarks that already push this hardware to the limits. By the time backer models arrive in 2016, its AMD chips will be over two years old, and would need to be upgraded further for the consumer model. Outside of future proofing matters, SteamOS reportedly performs significantly worse than modern Windows systems - something the SMACH Z team couldn't address on its own. And that's not even getting into overly optimistic features like its five-hour battery life. Most gaming laptops are lucky to last for two without a plug nearby.

Yet this is only a problem if we think of SMACH Z as a closed handheld system. The device is being developed with ImasD, whose ClickArm program specializes in custom modular devices. ImasD engineers are also working closely with SMACH Z on some of its biggest issues, including power consumption and cooling systems for a platform of this size. According to ImasD CEO Pedro Pelaez, that means SMACH Z parts can be replaced and customized just like any traditional gaming PC. "The device will be the first, modular handheld console, and has a big difference than the competitors," Pelaez told The Escapist. "It will allow the possibility to be upgraded in the future for new games."

In other words, the SMACH Z is effectively being produced like a PC, albeit one with a different control interface. "The SMACH Z is an small computer with 5" display," Pelaez continued. "We have focused special attention in the development in [issues like] battery performance, power consumption, temperature running. We will use for this device a new cooler system taking the best performance without increasing the weight and the power consumption." 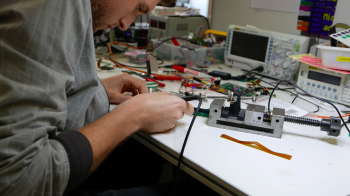 Outside of hardware, the SMACH Z is also looking into secondary operating systems. The Kickstarter campaign markets Windows compatibility as a stretch goal, but ImasD is already considering several possibilities. "In the first step Smach Z will use SteamOS, but it will allow the use of a lot of Linux platforms," Pelaez explained. "The Android and Windows support will appear later, because we need more time to develop the controllers. Maybe Android will appears before Windows. And we'll have the option of dual-boot, for sure."

We won't know how the SMACH Z turns out until next year, and that's largely dependent on investments and Kickstarter backing. It certainly wouldn't be the first console to fade away at the last moment. But all the same, it's hard not to feel cautiously optimistic for a Steam-based handheld, especially one with features its developers have described. It's the kind of platform I didn't realize I wanted until reading about it, and now I just want my hands on it to play for myself. And I'm probably not alone in that.

"I think many people are waiting for a device like SMACH Z," Fernandez said, "and it's a great opportunity for Steam to open a new way of playing Steam games."

With a little luck, maybe that day will come to pass.