There's nothing unrealistic about the concept of a desert planet -- Mercury and even Mars can be labeled as such -- but the concept of a living desert planet requires a little more thought. Luke's home world of Tatooine is no dead world; apart from its human immigrant inhabitants, it has native flora and fauna, including banthas, womp rats, and at least one sarlacc.

So how does a world that consists of one big desert manage to support life? Tatooine raises some questions to which we may not have satisfactory answers. We know the planet has a non-toxic atmosphere with enough oxygen to support life, because we see humans milling about without any special precautions like helmets or breathing masks. But where does this oxygen come from?

If Earth suddenly lost its sources of oxygen replenishment, it would not take long for all the oxygen in the atmosphere to be depleted, because oxygen is a highly reactive gas that combines readily with other elements. What keeps our atmosphere at a constant 20% oxygen level is the carbon-oxygen cycle -- animals breathe in oxygen and expel carbon dioxide, while plants breathe in carbon dioxide and expel oxygen through photosynthesis. 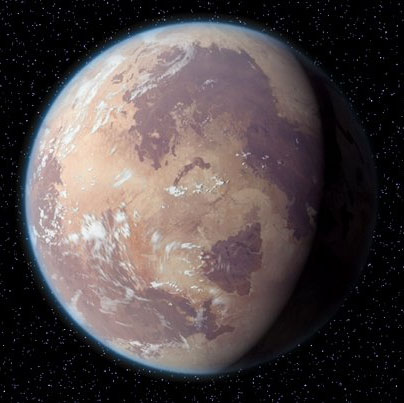 Further, is there even enough water on the planet to support life? The Expanded Universe tells us that less than 1% of Tatooine's surface is covered in water, found in rare oases, and we don't even see Luke living near one of these oases. Before we can point to groundwater reservoirs, we need to consider that the principal occupation of the locals is moisture farming -- drawing water out of the air.

Tatooine's average humidity level is 5.4%. As a point of comparison, the U.S. city with the lowest annual humidity is Las Vegas, in the Mojave Desert, and it averages between 21% and 39% humidity.

How much water can Tatooine's air contain? Let's assume a high average temperature of 100°F to give this planet the best chance of success, since hotter air is able to "hold" more water. At 5.4% humidity, every cubic meter of air can contain 2.5 ml of water. To fill a single cup of water, you would need to process 95 cubic meters of air -- roughly the equivalent of a 20 ft x 20 ft room. If the residents of Tatooine are resorting to drawing water out of such dry air, one can only imagine how difficult groundwater is to come by.