A place where a lack of plant life is certainly not a problem would be a swamp planet like Dagobah, where Luke met Yoda. Swamps are great environments for the propagation of diverse life: water, nutrients, plants... what more can you ask for? We'll assume that Dagobah isn't bathed in perpetual twilight, as the film would suggest, else concerns about the availability of sunlight to power photosynthesis come into play.

At first blush, our solar system has no example of a swamp planet, but it turns out that we need look no further than our own world, some 300 million years ago: the Carboniferous period. It was a time of global warmth, vast swaths of forest, and extensive coal swamps -- after which the period is named, since coal is fossilized carbon. 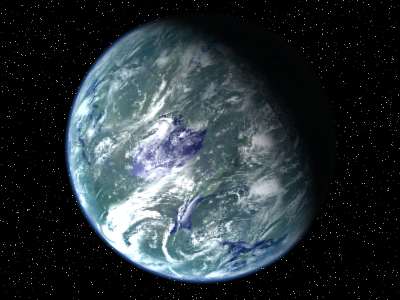 But to call Carboniferous Earth a swamp planet would be an oversimplification, as it was not the only biome at the time. Swamps and forests couldn't cover the entire landmass -- not if topography has anything to say about it. Swamps will form in areas of low-elevation that are saturated with water. While forests can exist at much higher elevations, we do eventually hit the tree line -- the point at which trees can no longer tolerate the environmental conditions, be it due to lack of moisture or heat in the thinner air. In fact, it becomes difficult to rationalize why any geologically active, living planet would not have a diversity of biomes. Mountains will form via volcanic activity and the collision of tectonic plates, and mountains affect climate by blocking wind, rain, and moisture.

What if Dagobah were not geologically active? What if it was flat, with no mountains forming at all? That would imply the planet has no liquid outer core to drive this geologic activity. If Earth's outer core would freeze into a solid -- which could be our eventual fate as the planet continues to cool -- then the magnetic field generated by the action of the flowing magma would die off. Without our magnetic field to deflect them, cosmic rays would strip away our upper atmosphere, including the ozone layer that protects us from UV radiation. Through DNA damage, the radiation would ultimately wipe out most life on Earth.

Were a forest planet to exist, it would look much more like Endor, the Ewok homeworld. While Endor is known as the Forest Moon and is appropriately covered by massive pines and redwoods, the expanded universe does specify that the moon also contains vast dry deserts, grassy plains, small oceans, secluded lakes, and mountain ranges. This calls into question whether you can truly label Endor a single-biome world.