As a final case, we'll consider an ecumenopolis -- a world in which urban sprawl has continued to grow until the entire surface is overrun with what amounts to one big city. Coruscant, depicted at great length in the terrible prequel films, is one such world-spanning metropolis.

According to the Expanded Universe, the population of Coruscant has historically risen to up to several trillion. On a planet with no farmland to grow crops or raise livestock, how do you feed such an enormous population?

Current estimates state that at least 1.2 acres of farmland per person are required in order to maintain American dietary standards. Assuming a population of 5 trillion people, that's a requirement of 6 trillion acres of farmland needed to sustain Coruscant's population.

Earth's surface area is 128 billion acres in size; if we assume Earth-sized planets with 100% of their surface covered in farmland can exist in abundance, then it would take almost 50 of these planets to feed Coruscant. But 100% farmland is unrealistic. On Earth, only 30% of the surface area consists of land, and only 33% of that land is suitable for farming, which amounts to 12 billion acres. It would take 500 Earths to feed Coruscant. 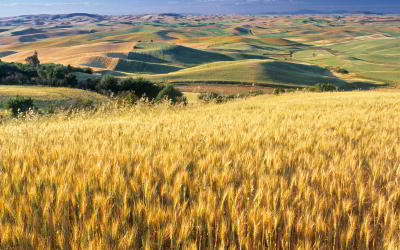 Assuming you can have a multitude of solar systems serving as farms for a single planet, how much food would have to be delivered to Coruscant on a daily basis? Americans typically eat up to 5 lb. of food a day -- so 25 trillion lb. of food would need to be delivered daily. Let's put that into context. Darth Vader's flagship Super Star Destroyer, measuring 19 km in length and dwarfing the regular Star Destroyers, which are less than a tenth of its size, has a cargo capacity of 550 million lb. It would take over 45,000 of this largest warship ever built (at the time) to deliver the food required to sustain Coruscant's population -- every day.

I didn't mention water yet because the expanded universe tells us that water distribution on the planet is a self-contained system, likely requiring recycling technology of sorts. Why can't the same be said for food? Because "foodstuffs" is listed as one of Coruscant's major imports. Even if Coruscant is able to produce 75% of its own food requirements, importing the other 25%, that's still 12,000 Super Star Destroyers worth of food coming from dozens of planets.

Even if we get past the food crisis, a heat issue also presents itself. Coruscant's energy demands would be so high that the heat given off as a result would render the world uninhabitable. We won't get into the math on this one, since a physicist with a sense of humor was kind enough to do that already, but estimates suggest the temperature could rise to 440°F -- effectively an oven.

One can argue that the technology on such a planet is so advanced that we can hand wave away these considerations. Well, while Arthur C. Clarke did say, "Any sufficiently advanced technology is indistinguishable from magic," one thing that technology has yet to do is defy the natural laws of the universe. Until that happens, basic thermodynamics tells us that Coruscant would not be able to dissipate the heat fast enough.