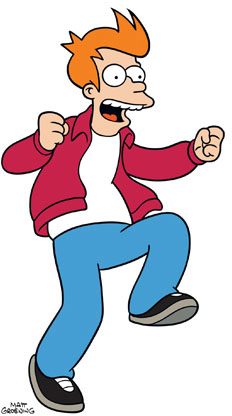 Image Source: Fry (Futurama) is his own grandfather

Imagine that your kooky great-uncle passes away one day, and in his will, he decides to leave you his diary. He was a treasure seeker in his youth, and amid tales of high adventure, you find mention of one peculiar treasure he uncovered in a strange, metallic box - blueprints for a time machine. He had the decency to include the folded-up blueprints within the diary, and as an esteemed physicist, you recognize that the science is sound and set out to build the device.

After enjoying a lifetime of far-future sightseeing with your time machine - which you kept secret, of course - you get the philanthropic desire to "pay it forward" on your deathbed. You decide to give another intrepid physicist the opportunity to stumble upon this discovery in an exciting way, just as you did. So you draw up some blueprints, lock them in a box, and take one final jaunt in your time machine a century in the past. A few years later, your great-uncle uncovers your buried blueprints ... The causal loop is closed.

In the immortal words of Keanu Reeves, "Whoa."

In the Bootstrap Paradox, the time traveling object, person, or information has no discernible origin. For instance, in the example we used above, the knowledge required to build the time machine came out of nowhere. Nothing created it - it only exists because of the causal loop. You know it because you read it off a piece of paper, which you wrote, because you know it.

If, instead, your dastardly future self stole the blueprints from a fellow physicist before a tragic particle accelerator "accident," then the knowledge has a clear origin, and we're instead dealing with the Predestination Paradox.

Consider this scenario. On the first day of your swimming courses, you receive a distressing message from the future: "You will die by drowning in 2024." Attached to the note is your very real-looking obituary. Deciding to take no chances, you resolve to never set foot in a body of water for the rest of your life.

A decade from now, you're involved in an accident on a bridge, and your car plummets into the river below. You manage to get out of the car, and the current isn't very strong, but you drown anyway, because you never learned how to swim.

In trying to alter your future, you end up fulfilling your role in creating it.

Oh, and in case you're about to point out that the note had no origin, it came from that shy coworker who has a crush on you. The one who knows the secret to time travel, but is trying to keep things under wraps, which is why the message was so cryptic.