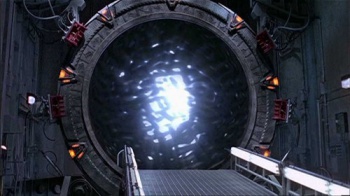 So how do we resolve these paradoxes? One simple way is to invoke multiverse theory - that our universe actually consists of an infinite number of parallel universes. Whenever you travel through time, you are actually traveling to a separate universe, and any changes made there will in no way affect your universe of origin. If you go back in time and kill Hitler, congratulations! You've prevented his atrocities in your destination universe, but your "home" universe is still one in which WW2 happened.

But maybe you don't ascribe to the multiverse theory, or otherwise feel it's a cop-out explanation to these paradoxes. In that case, Russian physicist Igor Dmitriyevich Novikov may offer you some solace. According to the Novikov Self-Consistency Principle, it is impossible to create a time paradox. If a certain event - such as the death of your grandfather - would result in a paradox - such as your existence - then the probability of that event occurring is zero.

"But wait!" you exclaim. "I saw my grandfather get run over by that Ford Model T!" Yes, but it turns out that he was rushed to hospital and resuscitated. No matter how hard you try, you cannot prevent your own birth by altering the past - the Novikov Principle won't allow it. Increasingly improbable circumstances may need to be invoked to explain why your grandfather wasn't killed by the poisoned potato, the falling anvil, or the cigar bomb. And as Sherlock Holmes said, "When you have eliminated all which is impossible, then whatever remains, however improbable, must be the truth."

What about Hitler? Turns out his murder was covered up, and his secret body double took over for him, unbeknownst to the general public. The billiard ball? It knocks itself slightly off course, but not enough to avoid the wormhole.

As for the Bootstrap and Predestination Paradoxes, well, by Novikov's Principle, they're acceptable closed loops. The past is allowed to be altered because the past isn't really being altered - the events are part of a self-consistent loop in time. In fact, in mathematical solutions to the equations of general relativity, physicists call upon "closed timelike curves," which are four-dimensional spacetime paths that return to their starting point and formed the basis for Novikov's Principle.

I think I need an aspirin...