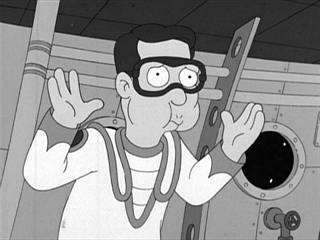 Over the years, Hollywood has offered us some spectacular death scenes in space. Flash freezing, explosive depressurization - they make for some memorable final character moments, but just how realistic are they?

Here are five ways you would actually die in outer space.

Let's get the most obvious one out of the way first. There's no air in space, so you would asphyxiate. Even parodies of bad 1940s sci-fi movies like The Simpsons' "The Planet from Outer Space" manage to get this one right. But what may shock you is just how quickly you would asphyxiate.

To understand that, though, we need a crash course on the human respiratory and cardiovascular systems. You breathe air into your lungs; within your lungs are tiny air sacks called alveoli which have walls so thin that gases can pass through them; the high pressure of air inside your lungs sends gas through the alveoli walls; the alveoli are close to tiny blood vessels called capillaries; through a process called diffusion, the alveoli pass oxygen into the oxygen-depleted blood in the capillaries; finally, the oxygenated blood is pumped throughout your body, allowing your cells to function properly.

If cells can't function properly due to lack of oxygen, they will begin to die. The brain, for instance, can go as little as three minutes without oxygen before cells begin to die. But in space, you would actually die in a fraction of that time. Why? Read on...