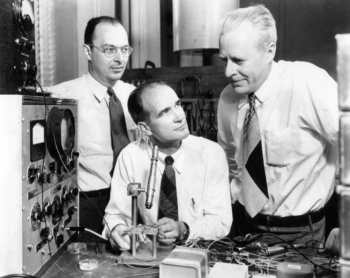 The transistor is a key component in all modern electronics and one of the greatest inventions of the 20th century. Developed in 1947 by William Shockley, John Bardeen, and Walter Houser Brattain - who were jointly awarded the 1956 Nobel Prize in physics for this achievement - the transistor revolutionized the field of electronics.

But Tesla conceived of it almost 50 years prior.

Electric engineer and technical writer Leland Anderson pointed out Tesla patents from 1903 that "contain the basic principles of the logical AND circuit element." He went on to explain, "Computer systems contain thousands of logic decision elements called ANDs and ORs. All operations performed by a computer are achieved through a system design utilizing these logic elements."

How are logic gates primarily implemented? With transistors. Because Tesla already patented these ideas, those who attempted to obtain basic logical AND circuit element patents decades later were surprised to learn just how far ahead of his time Tesla was.