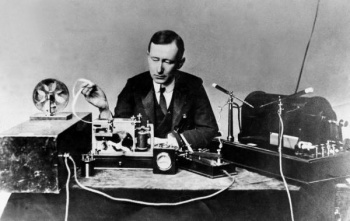 Guglielmo Marconi, the man who invented radio. Or... not. In 1901, Marconi sent a wireless transmission across the atlantic ocean, pioneering long-distance radio transmission. In 1909, he shared the Nobel Prize in Physics for his contributions to the development of wireless telegraphy.

But once again, let's go back to 1893, when Tesla was giving public lectures and demonstrations on the theory of radio transmission. Since the early 1890s, he had been researching electromagnetic waves (radio waves), and while his primary interest was in the wireless distribution of power rather than communication, successfully demonstrating "wireless lighting," he proposed that the technology could be developed for the purposes of telecommunication.

After Marconi made his famous radio transmission in 1901, Tesla remarked that this feat was accomplished through the use of 17 Tesla patents. Marconi won the ensuing patent battles in 1904, but in 1943, the US Supreme Court reversed the decision.