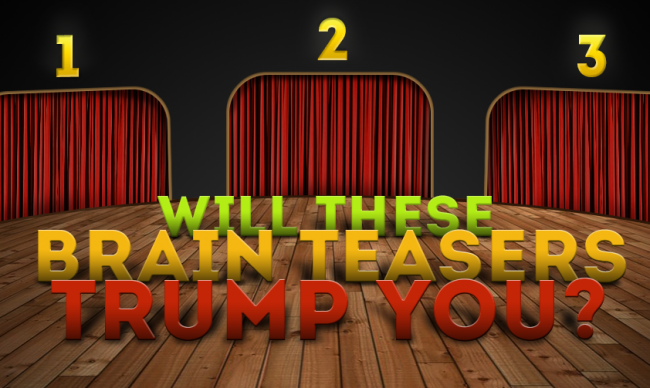 Probability puzzles can pose a challenge to even the most intelligent and educated in our society. Sometimes, intuition leads us to an incorrect answer; other times, overconfidence in our mastery of math can be our downfall. And on some occasions, we're too stumped to decide which solution to go with, and why.

Let's see if you can find the correct answer to these three brain teasers - the solutions will follow on the next page.

Now, pick a box at random. Open the lid, slip your hand inside - don't peak! - and withdraw one of the two coins at random. Look at the coin in your hand - it's gold. What are the odds that the other coin in the box is also gold?

Three prisoners have been sentenced to death: Alfred, Bart, and Charlie. The day before their execution, Alfred overhears the warden mention that one of the prisoners has been selected at random to receive a pardon. He asks who, but the warden says he is not allowed to say until execution day.

The warden agrees to these terms and tells Alfred that Bart is to be executed. Alfred now believes his probability of being pardoned has risen from 1/3 to 1/2 - that it is now between him and Charlie. In his excitement, he tells Charlie, who becomes even happier, because Charlie believes that Alfred still only has a 1/3 chance of being pardoned, while his odds have risen to 2/3.

Is Alfred or Charlie correct? Are Alred's odds of survival 1/3 or 1/2?

You're on a game show. You must choose between three identical doors. Behind one door is a car; behind the other two are goats. If you pick the door with the car, you win the car.

At random, you make your selection. The game show host, who knows what is behind every door, opens one of the doors you didn't select to reveal a goat. He then gives you the choice to switch your selection to the other unopened door, or keep your initial choice. Should you switch?

Have you solved each of these brain teasers? Click through to the next page to find out if you're correct!