"Two possibilities exist: either we are alone in the Universe or we are not. Both are equally terrifying." -- Arthur C. Clarke 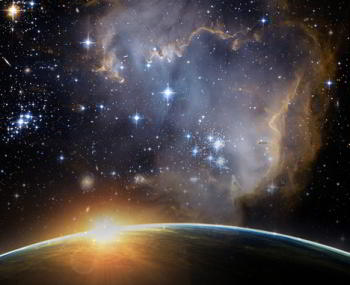 The universe is... vast, to put it lightly. How small and inconsequential are we in comparison? We inhabit but one of the eight planets orbiting a single star. The Milky Way galaxy contains 100 to 400 billion stars, and there are likely over 170 billion galaxies in the observable universe. To believe that we alone constitute the only life forms in this fathomless emptiness smacks of a narcissism that heralds back to when we thought the Sun -- and the entire cosmos -- revolved around the Earth.

Does that mean life must exist somewhere in the universe? No, but with trillions of planets out there, the odds that at least one other world is inhabited by a civilization don't seem all that unreasonable. But just what are those odds, exactly?

First, we'll dial back our scope to the odds of detecting intelligent life in our galaxy. Why? Our closest neighbor galaxy, Andromeda, is 2.5 million light-years away -- that means that if we were able to travel at the speed of light, it would take 2.5 million years to get there. We expect to detect intelligent life based on signals they would send out -- radio waves, the likes of which Earth has been broadcasting into space for the past century. Our signals have only extended about 100 light years away from the Earth, and any alien entity just receiving word from us now would be hearing a message that is already 100 years old. Between the signal degradation with increasing distance and the immense time scale, other galaxies are believed to simply be too far away for us to detect any signs of life from them.

So what, then, are the odds of us finding intelligent life in our galaxy? To answer this question, we turn to the Drake Equation. In 1961, astronomer and SETI founder Frank Drake came up with a formula that could estimate the number of intelligent civilizations that may exist in the Milky Way. That equation is: