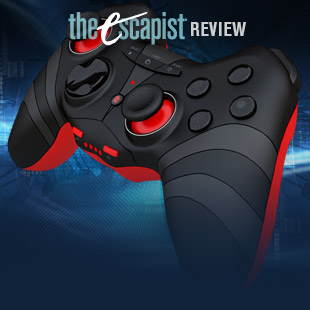 Somewhere between clocking in hours at Xenogears on the original PlayStation and gaming now on the PlayStation 3, I stopped caring for the feel of the PlayStation controller. Granted it's gone through several variations, from the Dual Analog Controller to iterations of the DualShock, but it's otherwise retained its basic shape and layout. The controller that I once happily piloted just hasn't felt right lately. I'm certainly no authority on ergonomics, but the current DualShock 3 naturally settles much too deeply for my liking, forcing me to crane my thumbs back and leaves the layout feeling cramped. I have gotten my hands on the PlayStation 4's controller and found it much improved, but that's still months away and doesn't help for its non-backwards compatibility.

So I was eager to get my hands on the Gioteck SC-1 and see if it fared better. Any older gamer will certainly remember the more prolific days of the third-party controller market, Mad Catz for example, which was perhaps dominated by gimmicks rather than trying to put out solid alternatives. In more recent days, these manufacturers have moved to attempting to fill niche markets like professional or high-end gaming. Likewise, while the Gioteck SC-1 bills itself as a Sports controller, it will be right at home for anyone looking for a PS3 controller with a different layout or someone wanting to take advantage of some of the additional functionality.

The two features that are going to stand out most are the positions of the thumbsticks and the overall layout of the SC-1. If you're a fan of the Xbox 360 controller, you're in luck because the thumbsticks are similarly offset. The thumbsticks are also concave, which works better to keep your thumbs from slipping than the outer layer on the DualShock's thumbsticks that tried to accomplish it with friction. Rather than the slightly loose feeling of the standard PS3 thumbsticks, the SC-1's are more responsive and snap back in place faster.