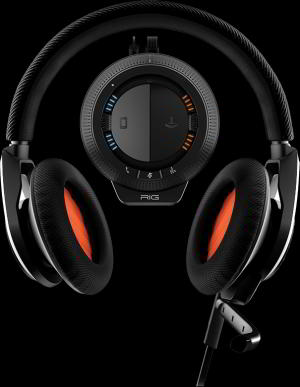 The first gaming-specific headset I ever bought was a Plantronics. I can't remember the make and model, but what I DO remember is the headset crapping out on me within six months, despite the TLC I show towards all my gear. Since that fateful moment back during my college years, I've always kept Plantronics at arm's length, despite the brand's more serious, devoted position on gaming headsets as of late.

The RIG stereo headset and mixer, then, is a good place to jump back in with the brand. Plantronics has had some cool designs in the last year or so, especially the Commander headset, so I was eager to see how quality and design had improved over the years.

The RIG takes some design cues from aviation headsets, but it's not a 1:1 comparison like the Commander is. The earcups are simple, rounded, yet big enough to cover your ears with little to no discomfort. Playing the Titanfall beta, Battlefield 4, and Team Fortress 2 for hours had no impact on my ears ... but it's a pretty tight fit otherwise. I always include a BIG HEAD disclaimer when I review headsets, because my noggin is, in fact, pretty big. But the earcups put some pressure on my head above the ears, and the general tightness was noticeable, even in-game.

The headband itself is relatively comfortable, wrapped in cloth for your pleasure. There are some harder points on the headband, but they seem to be positioned so they don't make constant contact with the top of your head.

The build quality is a little tight, stiff, but the earcups do twist sideways so you can drape the RIG around your neck more comfortably. Despite the initial reservations caused by the stiff build, the RIG feels quite light in the hands and on the head. It's a shame the tightness above the ears distracts from this, otherwise it would feel like you're wearing nothing at all!

Setup (I did all of my testing on the PC) is a breeze. The RIG uses a mixer, similar to other mid- to high-end headsets, although this is purely a stereo design (no Dolby or other surround mixing). The mic plugs into the headset with a 3.5mm connector, and the headset connects to the mixer using the same. From there, one USB (voice and power) and one 3.5mm cord (audio) goes to your PC. Assuming you know your way around the back of a PC tower, you'll be fine.

The mixer itself offers a few interesting features, and is focused on mobile integration, as well as voice/audio blending. There's a second 3.5mm input so you can plug your smartphone into the mixer, allowing you to make and take calls without taking the RIG off and pausing/leaving your game. This accompanies a giant flipswitch in the center of the mixer that will toggle you between your game mic, and the mobile mic. Both are thoughtful additions, and work as advertised, although if a call is important enough to take during Super Special Video Game Time, I'm probably pausing or leaving the game in question anyways.

You can also turn your RIG into a more outdoor-friendly headset, as the boom mic can be swapped out for a 3.5mm cable with built-in mic and phone controller. If you want something beyond earbuds to walk about the house or town with, the RIG does this with no exception.

The voice/audio blend is a blessing and a curse. It's tough to get the blend just right, leaving you with soft game audio, or soft voice audio. It's hard to nail down, but I eventually got a blend that worked fairly well with CS and TF2, coupled with Skype or TeamSpeak 3. Audio is a little on the heavy side; bass isn't an issue, but the treble could be stronger. It's not perfectly rounded, but the 40mm drivers do heavier music justice.

Positional audio is my biggest issue with the RIG. It might be that my audio/voice blend is off, but it's harder to pinpoint enemies in sound-crucial titles like Counter-Strike when using the RIG. While overall sound quality is good for movies, music, and certain games, finding footsteps is tough at times.

The RIG is a solid headset, offering great mic quality, acceptable sound quality in most scenarios, and a restrained design that will still click with most of the gamer crowd. The mobile integration is a nice touch, as is the inclusion of two different mic options.

But these all fall to the feet of positional audio, comfort, and price. $99.99 isn't steep for a headset that includes a mixer, but it is steep for a stereo configuration. While the mixer has some nice mobile-centric features, the blending controls are tough to fine-tune to your liking, and the lack of baked-in surround support is a letdown. Features aside, comfort is another issue, at least for big-headed folks like myself.

Brass tacks: This is not as comfortable as my go-to Astro Gaming A40 headset. It's not even close. And to top it all off, the RIG doesn't offer the same kind of in-game performance as other similarly priced hardware, so it's a tough sell.

Bottom Line: Decent overall sound quality and attractive design are let down by poor in-game chops and comfort issues. It's hard to justify at a $99.99 price point.

Recommendation: If you're willing to spend $100 on a gaming headset, include the RIG in your search. Someone with a smaller head, and more patience with the mixer, might have a better experience.