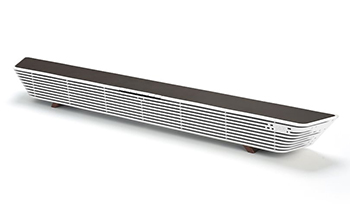 I adore plug and play as a concept, and I'm particularly fond of simple plug and play devices that substitute in for more complex systems and setups. Polk Audio's N1 Gaming Sound Bar definitely fits this bill, as it's basically a single-unit speaker system that looks to fill in for a full-on surround sound system. It should be noted that this is simulated surround sound, instead of true surround, but it's still quite impressive for what amounts to a sleek, black (or white) brick on your TV stand.

The N1 Sound Bar (henceforth just "N1") is elegant in its simplicity of design. The shape is reminiscent of the trapezoid-esque PS4, despite being designed in collaboration with Microsoft, but ultimately, it will blend right in with a gaming-enthusiast's other TV-connected devices. It's so well camouflaged in my tech-heavy living room, in fact, that I rarely notice its physical presence at all. The setup is as simplistic as the aesthetic design, which will be a boon to every gamer that just wants to get back to playing games. In fact, I had the N1 set up and sounding off in less than five minutes, with very little accompanying effort. Fast and easy are two of my favorite things.

The default input is optical audio which will connect directly to your Xbox One, but it supports the two other standard audio connectors (coax and 3.5mm), in case you want to connect it to a TV that doesn't have optical audio out. The N1 is literally as plug and play as they come, and once you unpack it, it's just a matter of plugging in the power and connecting the audio input. It works like a charm out of the box, and I didn't even bother with any of the more advanced features like Bluetooth until after I'd sat back and enjoyed a couple hours of Destiny. Instant. Gratification.

The Bluetooth option was similarly straightforward: press the Bluetooth button on the N1, connect with your device, stream audio. It hooks up easily to a computer or a phone to stream music or game audio, and works every time. Be warned, however, as it's easy to accidentally start streaming with your phone or computer volume too high, in which case you'll likely get a little scare when the sound starts playing. You will at least be impressed with the quality of the sound, as the distortion is minimal until you reach an obscene decibel level.

Full disclosure: I'm no audiophile. If you want a hardcore spec list comparison with other simulated surround sound products, you probably want to find a more suitable review. I am, however, a regular gamer and Netflix watcher, as well as music streamer at least once a week during my wife's Vampire: The Requiem campaign.

The sound quality from the N1 is impeccable at most reasonable volumes across higher ranges with precious little distortion, but when you start cranking up the input volume and the N1 volume at the same time, you'll start to hear distortion just before the sound starts to become uncomfortable. While the higher ranges are stellar, the bass is a bit lackluster, given that there's no standalone subwoofer. There is a woofer output for you to hook up your own, however, in case you really like your lows.

The simulated surround does an incredible job of left/right directional indication, but the front/back directionality is largely lost with the N1. It's not that different from using a headset in that regard, which is more than adequate for most gamers, but if you're really into audio cues in games, then you might need a proper surround setup. If you're like me, though, the N1 is perfect for your audio needs.

Bottom Line: It's not true surround sound, but it's a very reasonable facsimile, and will only set you back $150 right now direct from Polk. The bass is a bit lacking, but the rest of the range is stellar, with full, rich sound, and built in programmable compatibility with most TV remotes for convenience.

Recommendation: Next time there's a lull in the game release schedule, set aside your game budget for a month or two, and you should have all the funds you need to pick up the N1. At $150 (down from the original $300 MSRP) it's a steal, even if you have to provide your own subwoofer.