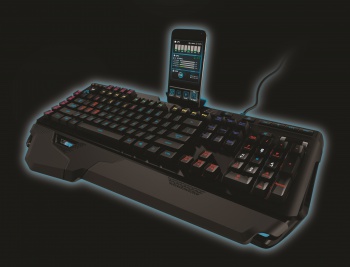 High-end Logitech gaming keyboards in the last decade have included a second screen. At first it was a small LCD that displayed game stats, while the G19 had a color 320×240 pixel Game Panel that could be compared to early smartphone displays. I was told by Logitech engineers that the cost to put a screen on gaming keyboards was increasing - it would drive the price of the keyboard way too high to be competitive. Logitech's answer was to remove the screen from the Orion Spark and to enlist your smartphone to do it for them. That's what the Arx Control app - available on iOS and Android, not Windows Phone for some reason - aims to accomplish. The app creates a connection with your keyboard via Wi-Fi, and uses that connection to display PC statistics, control the playing of music or videos, or launch games. It connects to your PC very quickly and efficiently - no complex networking or port information required. There's a clunky physical dock to rest your smartphone on the Orion Spark - attempting to complete the illusion that the keyboard actually has a screen on it.

The Arx Control display has a few small problems and one pretty big glaring error in conception. The app doesn't support landscape viewing, so you are forced to have a tall rectangle above your keyboard which could mess with your desktop setup. Arx Control can control mouse settings and display PC use stats such as CPU core temperature, but that's about all it can do right now. Older Logitech models had hundreds of applets available - the mini-programs game developers use to display information from their games - but there is no support yet for the Arx Control. I just don't know whether PC game developers will spend the resources needed to support yet another application from Logitech. I've asked the company's reps to see a list of devs who've at least stated interest, but I haven't heard any details. The silence doesn't instill me with a lot of confidence. 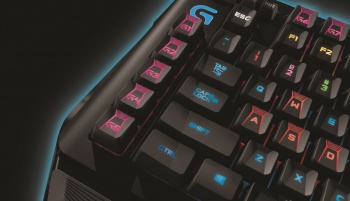 Using the Arx Control to display information also requires you to stop using your phone. I don't know about you, but I sometimes use my phone to check Twitter, send messages or you know, make and receive phone calls while I'm playing games. A "feature" that takes such freedom away isn't really going to work for me. You can certainly use an Android tablet or an iPad to double as the Arx Control device instead of your phone, but once you are taking up that much space on your desk you should just have a second monitor. Like most players do.

A handy, and perhaps unintended, benefit of the Arx Control app's Wi-Fi connection to your computer is the fact that you can walk away from your desk and it will still function. The part of the Arx Control app that adjusts the sound volume on your computer or can stop, pause or play your music just got a remote control. There's nothing fancy, no playlist creation or anything, but I found it useful to change the music playing on my PC from another room, for what it's worth. Incidentally, I'm not sure you need to have a Logitech product to use Arx Control - all you need is the Logitech gaming software installed on your PC.

With all of the positives and negatives associated with the Arx Control implementation, and knowing that the decision to remove the color Game Panel display was motivated by a desire to keep costs down, I'm surprised the MSRP for the Orion Spark G910 is still pretty high - $179.99 according to the Logitech website. Logitech's competitors offer mechanical gaming keyboards at a lower price, but you could argue the additional research and development needed to improve the switches, or the specific lighting under each key, warrants an extra bit of cash. It's not available at retailers just yet - I'm told it will be ready "for the holidays" - but you may want to wait for a sale or ask you Uncle Scrooge to buy it for you.

Bottom Line: The lack of a native display may put some folks off, but it really doesn't impact how great a gaming interface the Orion Spark keyboard really is. All of the features of the keys' design, the mechanical switches, the lighting and the software support add up to a peripheral that really improves your gaming experience.

Recommendation: If you can afford it, have been thinking about upgrading your keyboard, and don't need a screen, the Orion Spark is worth considering.

Even if it does have a silly name.