The Corsair Void Surround is Corsair's latest expansion into the gaming headset market, providing a high-quality corded solution for gamers looking for something a bit more heavy-duty. Even better, the Void Surround doesn't discriminate among gamers, as it is fully compatible as a headset with both the PS4 and Xbox One. It comes with a single 3.5mm jack, which can be connected to a USB 7.1 Dolby headphone adapter for use with the PC. 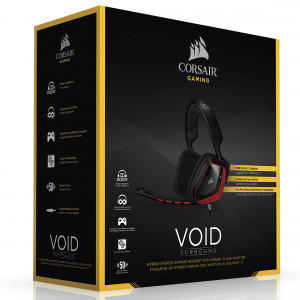 The very first thing i noticed when taking the Void out of its box was how heavy it was. It has these thick, sturdy, metal arms that really don't feel like they are going to break any time soon. The rest of the frame, cable, and pads are also similarly sturdy. I particularly liked the volume wheel and microphone mute buttons on the side of the left ear. Unlike other headsets I've used, which have flimsy volume wheels located half-way down the cable, the Void's ear-mounted wheel and buttons didn't get in the way, and feel very solid. I could clearly tell when and how much I am adjusting the volume.

The downside of it being so heavy, of course, is that it's heavy. If you're used to a lighter, plastic headset, extended play sessions can start to weigh down on your head quite a bit. The good news is that the Void's ear and head pads are really soft, and fully enclose your ear, lessening the impact of the headset's weight. I've had problems with headsets in the past that don't fully enclose the ear causing discomfort after about an hour of play, but I can safely say that during a two-hour play session, the Void felt perfectly fine.

To me, comfort is one of, if not the most important things about a headset, as this thing is going to be sitting on my head 90% of the time that I am playing video games. After pushing three hours, my ears did start to feel a just a tad uncomfortable, but that is something that shouldn't really be an issue for your average gaming session. The unit felt snug and secure, for as long as I needed it to. It also managed to fit my giant head with no problems, so all my big-headed brethren need not worry about that.

Moving on to the actual sound quality - if you are used to your headset blocking out most of the outside world (noise-cancelling or otherwise), the Void actually doesn't do a great job here. It may be due to the soft squishy ear pads, but I could still hear things going on in the world outside of my headset with decent clarity. Inside the headphones, the sound quality was great. As advertised, they produced full 7.1 channel surround sound, provided of course you download Corsair's companion software. There was no crackling when I adjusted the volume, and no incompatibility issues with any of the games I played. Just crystal-clear surround sound.

That goes double for the microphone, which unlike the headphones does actually have noise-cancelling built into it, meaning your teammates will always be able to hear you with clarity. I tried it out in several VOIP programs, including Skype and Mumble, and didn't experience any problems. Despite having a flip-up design that has proven to be flimsy on other headsets, the Void's mic was just as sturdy as the rest of the unit. I liked that the arm was flexible enough to be moved into a comfortable position, but firm enough that I wouldn't accidentally bump it out of place during play.

I do not own a PS4 or Xbox One, so I was unable to test the headsets compatible with either of these systems. However, it worked just as well on my android phone and my 3DS as on my PC. Having just the one jack and the foldaway mic makes it a great choice for gaming on the go. Keep in mind when taking it out and about: while the pads will swivel so you can put the headset down around your neck, if you've got a thick neck like mine it will get pinched.

At $79.99, it may initially seem a bit pricey for a corded headset, but is comparable in features to the Logitech G430, which retails for the same price. You're definitely getting what you pay for, and it seems a reasonable price considering its high build quality.

Bottom Line: The Corsair Void Surround Gaming Headset is a heavy-duty surround sound headset for those of you looking for an affordable option that you won't have to replace in a couple years. It's definitely a bit on the hefty side, but it makes up for it by being surprisingly comfortable.

Recommendation: If you're in the market for a gaming headset, no matter what platform you play on, this is one of the best options out there.