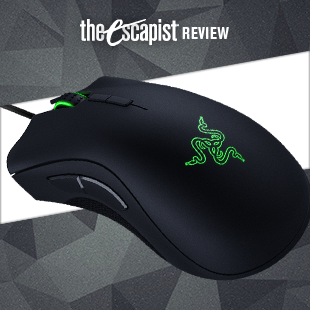 Looking the Elite over, you'll immediately find it familiar if you've ever used a DeathAdder before. The shape hasn't changed in years, and small refinements from recent models are still here, like the rubber grips on the side panels of the mouse. The only immediately visible change to the mouse is the addition of two buttons right below the scroll wheel. By default, they allow you to quickly switch between your DPI settings, but you can use Razer's software to program them to do anything you like.

Most of the changes to the newest DeathAdder aren't visible - they're under the hood. First and foremost is the new sensor. Razer calls is a "new eSports-grade optical sensor," and it's capable of up to 16,000 DPI. The sensor is very accurate, performing at both high and low DPI settings without skipping or stuttering. There's also been a subtle change to the scroll wheel, with the DeathAdder Chroma's wheel, which featured small scallops on the rubber surface, being replaced with lines of small raised dots.

Also new in the Elite are the switches for the left and right mouse buttons. Razer co-designed these new switches with Omron, the world's leading supplier of mouse switches. Razer claims that these Razer Mechanical Mouse Switches "are optimized and tweaked for the fastest response times for gaming and for extended durability up to 50 million clicks." It remains to be seen if this new switch will eliminate the biggest issue that has plagued the DeathAdder line of mice in recent years - the penchant for turning single clicks into double clicks after a few months of use. Thus far, the switches on the DeathAdder I've been testing seem to be working pretty much perfectly.

As with all of Razer's mice, you can fully customize every aspect of the DeathAdder Elite using Razer's Synapse software. You can set up custom profiles for your game, programming buttons however you like them. You can also adjust the polling rate, mouse acceleration, and even tune your mouse to your favorite mouse pad. As you'd expect, you can also set up custom colors for your mouse, including effects and more.

The DeathAdder Elite is a solid gaming mouse that hits all the right notes. It may not have as many buttons as some other mice, but if you're not one of those who wants every function bound to a mouse button, it offers more than enough. It comes in at $69.99, which might seem like a little bit much for what looks like a fairly simple unit, but the Elite is well-made, feels great in the hand, and offers plenty of customization options. It's probably not worth upgrading if you own a recent version of the DeathAdder, but if you're looking to upgrade from an outdated or basic mouse, the DeathAdder Elite is a great option.

Bottom Line: The latest iteration of Razer's long-running DeathAdder mouse is a solid, well-performing mouse that works well in pretty much any type of game. Its familiar shape and feel fits perfectly in the hand, and its performance is very solid.

Recommendation: The Razer DeathAdder Elite is a solid iteration on the existing DeathAdder line. With new switches, two new buttons, and other minor changes, it's not enough of an upgrade to dump the more recent versions of the mouse, but it's a solid entry into the PC hardware world that clocks in at under $70.