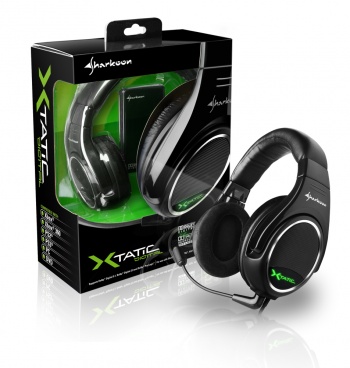 Sometimes you have to game stealthily. Whether it's because you don't want to wake up the person with whom you co-habitate, or you want to keep the wrath of parental units at bay by quietly grinding your Blood Elf mage past the witching hour, we've all needed to either turn down the sound completely or don a headset. For the more communication-minded gamers out there, wearing a headset and mic is the standard instead of the exception. In the past, you had to sacrifice sound quality when wearing a headset, with most models only offering stereo and wasting the capabilities of most 5.1 digital sound cards. The last few years have seen headsets that offered surround sound, but they were either too bulky or the sound was muddied.

Enter the Sharktoon X-Tatic 5.1. Moderately priced for a high-end gaming headset, the X-Tatic uses 4 (count 'em, 4!) speakers in each cup to provide "true" Dolby 5.1 Surround Sound. The headset is large, but doesn't feel too heavy. The mic is detachable and can bend to your preferred position.

When I put on the X-Tatic, connected the various connections to my PC (USB or Optical) and powered the "audio control station," I was impressed by how light it felt on my head as I booted up Crysis. Sharkoon went to great lengths to make sure that you weren't trading unbearable pain for good sound. The soft fabric inside the cups cushioned my ears nicely; I could easily forget that I was wearing a headset at all.

I'm not exactly an audiophile, but I was pleasantly surprised at just how good Crysis sounded. I could hear everything. It helps that the sound design in FPS games is robust, but I could hear snatches of Korean spoken behind me and accurately predict from what direction the KPA were approaching. On a lark, I booted up the StarCraft 2 beta and was happy to find that units on the left side of the screen sounded just as they were positioned. The X-Tatic works as advertised.

After a few hours of use though, downsides did manifest. The bugger is hot. Perhaps in order to be comfortable and provide true surround sound, there could be no ventilation. My ears became noticeably hotter and, sorry ladies, sweatier, the longer that I played. Also, Sharkoon says that the X-Tatic has a lot of connections "to offer you countless possibilities to easily connect the X-Tatic 5.1 to your favorite device," but I couldn't test it on my Xbox 360. The only provided way to do so was through a (provided) optical cord, but 360s don't have an optical out as standard. You have to buy an adapter. In order for the mic to work with the PS3, the manual states that you also need an additional adapter.

The Sharkoon X-Tatic 5.1 headset gets a lot of things right. It sounds good and truly does offer surround sound without blasting awake your neighbors with an impromptu fragfest at 3am. But you should take a few breaks during said fest, lest your ear sweat starts interfering with the sound fidelity.

Recommendation: There are both cheaper and more expensive 5.1 headsets on the market but you could do a lot worse than picking up the Sharkoon X-Tatic for some serious stealth gaming.

Available through Amazon and GoGamer.