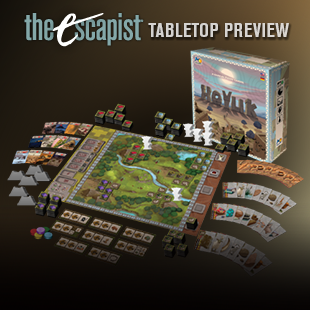 Höyük is an upcoming tile placement city building game themed around neolithic cities, and has had a long road leading up to its current Kickstarter. I was able to access and play the game before its printing via print-and-play files provided by publisher MAGE Company, and what I found feels like a forgotten classic. It has flavors of Carcassonne, but with an almost SimCity-esque twist of big picture management.

In Höyük, your basic action is to place homes, ovens, shrines, and animal pens onto the growing city board. What you're allowed to place is based on the draw of a random card with the symbols of one or more structures. As tiles are placed, you build up blocks of houses and features of your color connected to blocks of your opponent's houses. When space starts to get tight, you expand upwards - as neolithic settlements historically did - and put houses on top of houses. Features like the shrines, ovens, and pens alternately allow you to score more points, ward off disasters, or limit where opponents can build. As the game goes on, random cards won by having the most of certain kinds of city features are played to either place more tiles for an advantage later on or score victory points.

Unlike Carcassone, Höyük's decisions feel like they matter for a long time after you make them. While in other tile placement games you score as you place tiles, or as features get completed, your long term vision really seems to matter. Höyük is certainly a heavier, more strategic game than other tile placement games of city builders, but I was very pleased with the way it panned out. Further, it included rules for basic, intermediate, and advanced games, each playing slower or more tactically than the other. For most groups, I'd guess that the Intermediate game will be a sweet spot - about as long as Carcassone, but with a tactical richness that it lacks. 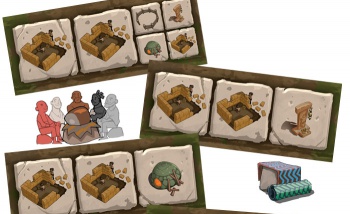 All of this richness is balanced, sometimes frustratingly so, by the Catastrophe cards. See, the catastrophes are things like packs of wolves, earthquakes, invading enemies, or famines that destroy chunks of city blocks. As they appear, they randomly target different blocks based on characteristics like "tallest houses" and "least shrines." On one hand, they're great - they keep the board from devolving into a static game of expansion where only certain sections of the board are active. On the other hand, they can be intensely frustrating, as the only thing keeping you from sliding into last place gets obliterated by random chance. It's an odd concession for a game with otherwise traditional European design elements, but doesn't feel entirely out of place since each catastrophe can realistically only show up once - so if you got screwed because you had only one shrine, you won't get screwed for not having shrines again.

Höyük's art is nice, with lots of rounded edges and whimsical design. The colors are rich, but the game doesn't depend on them and should be quite friendly to colorblind players. It's hard to tell what the game will look like until the final product is out. If the pieces aren't high quality, the game will probably look quite washed out. Otherwise? This one will look great on the table.

Höyük is currently available via Kickstarter, and is scheduled for release in September of this year. Check back for a full review based on the printed product closer to release.