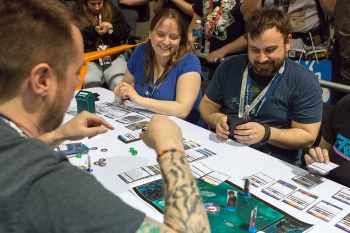 Mike Krahulik had tooled around with making a card game for years before he really knew what to call it. "At the time, I was fed up with running Fourth Edition Dungeons & Dragons," he said. "It had cards, but it wasn't really a card game. I came from Pokemon and Magic: The Gathering." He wanted to build a roleplaying game that was easier to play, quicker, and less preparation intensive for gamemasters and players. The game that finally emerged is being called a "card game adventure", and its name is Thornwatch. It's based on Penny Arcade's popular Eyrewood comics. After years of work, he's begun widely playtesting the game in preparation for a launch in 2015. I caught up with Krahulik at PAX East, where I was able to talk with him about the game and sit down for a few hours of a playtest session.

"Originally the game was just called Card Warriors," said Krahulik, whose alter ego Gabe is the foil for Penny Arcade's Tycho. It was a game where players had characters, each represented by a deck, and fought a Game Master's premade adventure of enemies and monsters. The game didn't have a fictional home for a long time; it was honestly sort of soulless sounding. So it was thematically stagnant until the advent of the idea for the Thornwatch characters. "Once we put it in the Eyrewood and I came up with the idea of the Thornwatch it just started to roll." The Eyrewood, said Krahulik, was perfect for what he and creative partner Jerry Holkins wanted to create. "It's a magical forest, which could be cool, but it's not: It's terrifying. The thing we like about it is that you have the Lookouts, which are little kids in this horrible place doing horrible things. They're being turned to stone by basilisks. But they're still kids... On the other side you have the Thornwatch, which is a much darker take on the whole thing."

Revealed during the playtest session was the idea that the Thornwatch, who have already had several comics written about them, are dead. "They are spirits of the forest, so if you are familiar with them before the playtest we talked about how when someone needs their help there's this ritual that must be done to summon them. That's how they're able to travel through trees magically and shift energy between each other, they're spirits." Going on, Krahulik laid out the dark place that the Thornwatch occupy in the world of the Eyrewood. "We did a comic a while ago that's about the Thornwatch from the lookouts' perspective where the lookouts are being taught never to call the Thornwatch. They actually have a little poem about how horrible it is, and the reason it's looked down upon is because you're summoning ghosts. It's a ritual done with blood." But the Thornwatch, it turns out, are protectors.

When starting the game, then, every mission begins with a magical knot. "A knot gives you clues about what the mission is," said Krahulik, "Jerry has this whole list of knots, and the knots mean something. Like, Wagon-Wise tells you that something is missing." That story plays directly into the design of the game. "The game is focused on: Here's the knot, you guys arrive, let's have fun."

The game will include both a preplanned campaign in the world of the Eyrewood and a stock of quick knots and creatures to draw from for more impromptu adventures. "We want those to take about two hours," said Krahulik, "and we want the campaign games to take about four hours each." The game will include a set of maps for that premade adventure, ready to be re-used for custom ones. Krahulik said he had "about twenty-five" maps drawn up, but wasn't sure how many would be in the final product.

They're being cagey still about what the exact story of that campaign will be, and Krahulik gave only this detail: "I'd say the initial story will give players a new viewpoint into the Eyrewood. You've seen it from the Lookouts perspective but the Thornwatch is very different. There's even a few secrets about the Eyrewood that we're excited to share. In terms of [individual] stories we plan on connecting all these groups. You will meet Lookouts and Daughters for sure."