I have always been interested in World War II. When I was a kid, I'd put the TV on and flip the channels looking for any old World War II movies. Yeah, I knew they were glorified accounts, but as I got older, I did a bit more research into the battles and the strategy involved. By the time I was in my mid-teens in the 1970s, I had done reports on the Battle of Midway, The Battle of the Bulge and the North African Campaign. And it was right around that time that Avalon Hill gave me an outlet for the strategy I craved.

What follows, in chronological order, is my fond and rose-colored recollection of a several Avalon Hill games that I spent way too many hours playing - as well as screaming at my sister "Don't kick the table!" These weren't all the best games, and this is by no means an all-inclusive list, but they are the games that helped shape my current love for real-time and turn-based strategy video games. 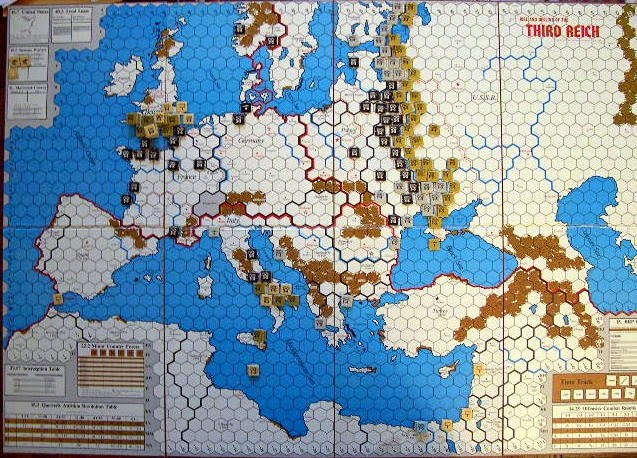 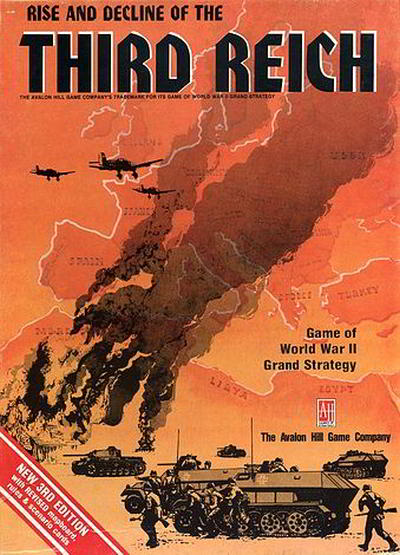 Of all the Avalon Hill games I played, this was the one that I invested the most time in. It gave players the opportunity to play as Germany, Great Britain, Russia, the United States, France or Italy, but in the end, my friends and I usually ended up playing just Great Britain, Germany and Russia, with the Great Britain player tackling the French until defeat, and bringing in the Americans when they rolled in in 1942. The German player would take on the Italian role as an Axis cohort, as well as the minor Axis allies of Finland, Bulgaria, Rumania and Hungary.

What made this game so special was being able play the entire expanse of the Eastern and Western front land war of World War II, complete with the possibility of paratroop drops, naval invasions, interdicting air battles. Players would get resource points for every country they occupied and would be able to spend those resource points through declaring war on various countries, buying units, or declaring the start of an offensive if you wanted to attack the enemy.

The game was massive in scope and an incredible time sink. I ended up setting the game up far more times than we ever finished it. Invariably, we always got bogged down in the summer offensives of 1943, but half the fun was trying new and different things, such as assaulting Malta or Gibraltar, doing a German amphibious landing in England or trying to take out Spain or Turkey. Another aspect of the game that was always interesting was trying to figure out all your attacks in such a way to get the best "odds" while taking out as many stacks of units as possible to gain the most number of hexes. Heaven forbid a bad die roll when you had 3-1 odds that took out much of your attacking force.

Even as I began to get involved in other Avalon Hill games, this one was always my "go-to" for large scale grand strategy.