Bolding: Because of the staggered release schedule there have been some concerns over both home and organized play, and whether or not people will have enough material to start playing their weekly campaign right off in the new edition and carry them all the way through release. What would you say to people concerned about that?

Mearls: I would say that's definitely where Basic D&D comes in. When the Starter Set launches it's going to cover character creation. Once the Player's Handbook launches we'll update it. [Basic D&D] is going to be a updated a few times when it first launches. With basic D&D you'll have the core monsters, magic items, all the rules for creating adventures, for Dungeon Master guidelines, for balancing encounters, for treasure, treasure tables, encounter tables. This is literally the process I used to outline it: I took the old basic set from 1981 and just the rules in there, the magic items, if it's in there it's in the basic set - except a few things that people don't see as iconic anymore. For monsters, we just went through and said "What are the typical fantasy monsters like Orc, or Ogre?" with a few adjustments for power level in there so there's a nice curve. In theory, with basic D&D, you could run an entire campaign. The core rulebooks could be expansions to that. The core rulebooks are like Advanced D&D.

Bolding: Is there any plan to put Basic D&D into print?

Mearls: Not right now. We know that a number of people have asked about that, either as print on demand or as a print book. I think what we'll most likely do is go through the launch and see where we are and how much demand there is. If we're seeing demand then we'll go ahead and do it. I'm a little nervous about that because it is a free product and I don't want people to go to the game store and want to get into D&D, and get that book, and find out the book is free online. So there's a balancing act. The key would be letting people know if they're buying it that they could get it for free. I don't want the first thing people to feel about the new D&D is that they got tricked into buying it.

Bolding: So do you see that being where the Starter Set comes in?

Mearls: Yeah, exactly, because the difference between basic D&D and the starter set is that basic goes from levels 1-5, and it's almost like a board game. You read a few rules, pass out the characters, and you start playing. You think of a game like Settlers [of Catan] or Ticket to Ride: You open it up and within an hour you could be playing it. There's also an element there too with the characters, the pre-gens, a guide into the story of the adventure. Your flaws, your bonds, your traits, are all tied into the story of the adventure. We built those characters so that they have ties that link into the adventure. So there's one character whose backstory is that they were refugees from this town that was overrun by monsters and now they want to go back and reclaim it, and that's a town that shows up in the adventure as a place you go explore. So when the DM says here's this NPC the characters can say "Oh, I know that person" or that's an enemy, or a friend, or an old mentor, to really get people moving with the adventure. So when the players sit down they really have their roles in mind. It shows players it's not just about learning the rules or fighting monsters and stuff, there's the whole roleplaying element of it. 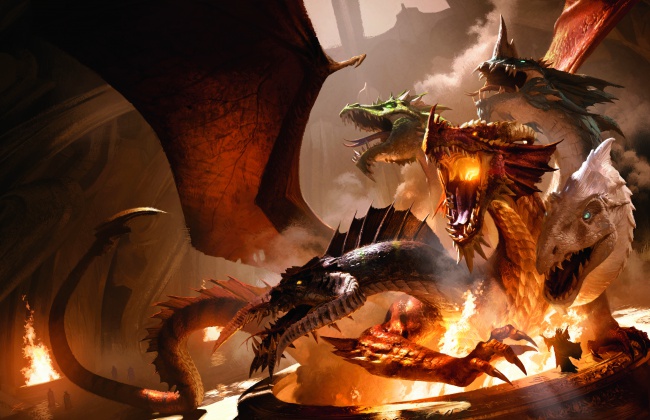 Mearls: Yeah. Very much so. We looked at this, and with the starter set we kinda asked ourselves: When people play this and they've never played D&D before what's the thing we can do that shows them what makes a roleplaying game unique? They've played board games, miniatures games, video games, so if we can show them "Oh, okay, it's like acting. there's a person I'm assuming the role of" and show them the implications for gaming. And also a way hopefully with a new DM they can see "Oh I get it, I want to run an interesting campaign and get peoples attention so here are the characters they've created and the campaign I've created and here's the intersection between the two." It's not just here's the campaign, a story that has nothing to do with the players, or here are these blank featureless characters to be attached to the story. It's about the interplay.

Bolding: Are you planning on trying to do similar story hooks in further published modules after that?

Mearls: That's definitely the plan. What we'd like to do is that whenever we have an adventure - and this is something new to the game and we'll get better at it as we go along - give the DM and players the important NPCs and organizations for this location. Give people a sense of when they're creating the characters, here are the hooks. Adventure hooks are usually things like "The players are looking for a potion to cure their friend's disease." Well these are more like "Well you probably already know this guy" that make it feel more organic.

Bolding: Do you think that push to emphasize those elements in D&D is part of what you're trying to do with big storylines like Tyranny of Dragons?

Mearls: Yeah, 100%. That's a big part of it. They really play out the idea of what makes a roleplaying game unique and gets people excited about playing through. Every campaign I've played in that has been successful has had those recurring villains, those recurring story elements that make the game feel unique. When we look at Tyranny we think of the events and what makes people feel involved in them. Having those things gets people invested in the same way they can feel about, say, a homebrew campaign.