Bolding: How concerned are you with making this first set of adventures feed into not just Tyranny of Dragons and the system, but in helping people re-learn the game, get back into the game? Its been quite a while since D&D was at the forefront of everyone's minds and players have lapsed at D&D or stopped playing entirely. What steps are you taking to recapture those players?

Mearls: At Gen Con one of the events we're running is a one hour dungeon delve. It gets people playing a quick mission even if they didn't playtest, and that feeds into organized play so they can keep that character, XP, and treasure. We'll have character creation at Gen Con and at PAX, so you can walk up and see how to make a character. Those will run six times a day. That's half of it.

The other half of it is introducing to organized play the concept of factions. If you think of the starter set, those characters will be tied into the adventure. Factions will do something similar but for organized play. When you make a character you choose a faction to join, and that gives you a basic outline about what the faction is at and wants to do - so you might not know the other players but you know what their faction is about and how your faction relates to them. We don't want to make it overwhelming, but there will be some adventures where since you're a faction you'll want to be in on them because they tie into your faction's goals.

We want to avoid a freeze-dried D&D experience where stuff that happened before the session and stuff that happened after the session didn't really matter. We're trying instead to make it the biggest ongoing campaign in the world - and rather than having each of the 10,000 people playing have their own individual storyline, the factions are the virtual character for people to attach themselves to. They see how their faction progresses and what their goals are. We want to create the sense that the organized play campaign is a campaign. We want them to be able to tell stories the same way they do about their home campaign. "Well last year we beat this dragon, and now we need to drive out the giants we allied with to defeat it..." Leaning on the idea of a shared story instead of letting each session of organized play stand on its own.

Bolding: Are there any plans right now to tie in people's home games to the organized play experience, or is that purely at game stores and conventions?

Mearls: Well right now the two Tyranny of Dragons adventures will be entirely OP legal, so if we use the OP guidelines to play Tyranny we can take our characters and go to our game store and play D&D expeditions. The encounters is a little trickier because encounters is like the first few adventures of Tyranny, so you might decide to start a home game after completing that season of encounters.

When we're talking about organized play, home play is a big question mark for us. We're not exactly sure the best way to intertwine it with everything else. That's somewhere we'll be watching to see how it's playing out in relation to everything else and how much content people want. We want to make sure that conventions and stores have a lot to offer. We'll reevaluate at six months to a year. 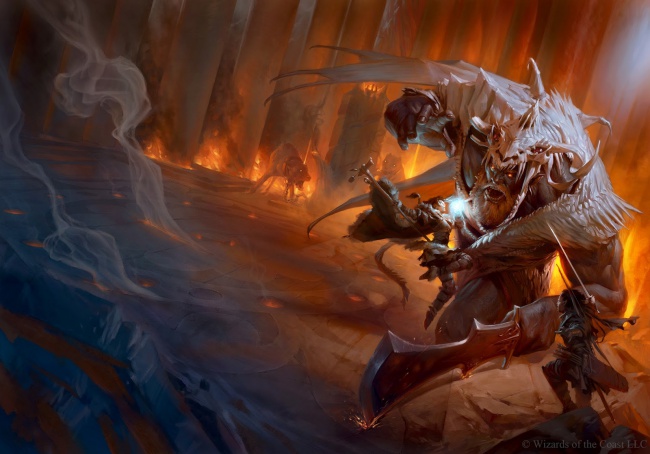 Bolding: Forgotten Realms is the new setting. It's D&D now. How are you finding the reaction to making it the prime D&D?

Mearls: It's funny. When I was working on third and fourth there was this dialogue of "Should we just embrace The Realms as the core setting?" And we were always very wary of a big backlash. Honestly people have complained, but I think when you look at how we handled the playtest, and they'll see as we roll out the core rulebooks and Tyranny of Dragons that The Realms elements are strong enough that if you like The Realms or if you don't have a setting they kind of fill in the blanks and really bring the adventure to life, but one of the strengths of The Realms is that it's so diverse that we're not really cancelling anything out but get access to things like the Cult of the Dragon. Using The Realms lets us have a very flavorful villain group with an ongoing story that we can use in the future. If you look at like Red Hand of Doom, one of the big 3rd Edition adventures that went over very well, now that adventure's published we can't really use that adventure again because it didn't have a home in D&D. It doesn't really fit into a larger world. Using The Realms let us have that.

On the other hand, if you're running your own campaign I think it's not much more work than if the game were set in Greyhawk or what have you. And actually it will be easier for conversion in the long run. Every time you pick up an adventure it won't be a completely new D&D, a completely new group, a completely new villain. Instead we can go back to these touchpoints, like the Zhentarim or the Red Wizards.

Bolding: : That's really interesting to hear. As far as published setting material, is there a Forgotten Realms campaign setting on the table in the future?

Mearls: We can't say anything there yet. But I will say that whenever there's an example in the DMG we used The Realms, and there's enough information there if people want to get started with a Realms campaign.

For more on the new D&D, check out our features on the new edition's art and the launch adventures.