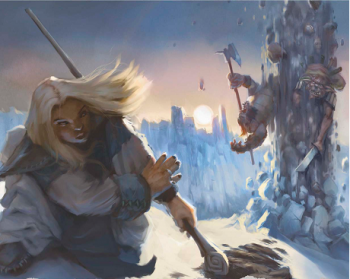 5th Edition had one of the largest - if not the largest - public playtest for a roleplaying game ever. But according to Crawford "even having that many playtesters there are leaps of faith we make as designers. Ultimately, a playtester can only tell us what works and what doesn't work, but it's not the same as designing something. When we design we're not only coming up with a core idea but also how that idea connects with everything else in the game. Playtesters are impeccable at saying what they hate or love, but not at knowing what's causing them to feel that way." To fix that, Crawford and his team spent hours combing through playtest feedback.

"People would tell us they hate a rule, but then we look at the rule and it's giving them something they say they want somewhere else in their feedback. So we know from sleuthing that it's not what they truly want. Much like a physician we have to figure out what's actually causing the pain, not just the symptoms."

That meant a lot of work and some pain, too, Crawford noted. "We were willing to toss anything. Sometimes things we had worked very hard on." Like D&D 5th's foundational Advantage/Disadvantage mechanic. "When we created that it was an experiment," said Crawford, "we thought it was going to be too weird for the community and we expected playtesters to reject it." So they put it into the wild, and playtesters liked it. Sometimes it didn't go that well, though. Crawford described the original versions of the Warlock and Sorcerer classes, which the team loved a lot. "But playtesters didn't like them," he said. So they killed the design - even though they loved the work and had spent hours designing and playtesting them. That kind of decision is what Crawford had to make weekly - the choice to undo hours of his colleagues' work.

I asked him if that felt like being the fun police sometimes, having to shoot down or veto his creative coworkers. Laughing, he said that he liked to think of his job "as being the fun preserver - making sure as much fun made it into the game as possible." Prompted, he explained further. "D&D has many kinds of fun. Some kinds of fun in D&D work against other kinds of fun or remove them altogether."

Much of that fun preservation work for Crawford was in the editing of the rules text itself, trying to ensure as much clarity, continuity, and intuitiveness as possible. "I was in charge of setting the guide that steered how we did all of our writing. Any new direction with rules design went through me," he said. I noted that I noticed some similarity between how 4th Edition and 5th Edition rules were presented. Crawford smiled. "We were able to build on a lot of the work we did in 4th Edition when it came to rules clarity. One of the reasons we were able to do that was because, remember, I was the rules manager for 4th Edition. So if you see continuity there that's why."

However, it was clear that some of 4th Edition's style was too rigid for Crawford. "We wanted this game to feel like our Dungeon Master's game," he clarified, "this is a game run by Dungeon Masters, not by Wizards of the Coast's R&D department. This game is a set of tools for DMs to use. When someone else is running a game it's theirs. We view rules as servants. They are the servants of fun. The less clear a rule is the more it intrudes on fun."