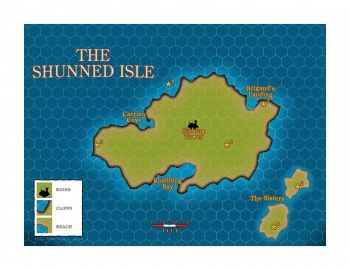 A Web, Not an Arc

Emergent story does not happen in a vacuum. You cannot simply release your players into the Forgotten Realms and expect entertainment to ensue - or if entertainment does ensue, it will likely be very short term and involve inns and serving wenches. Emergent story needs its own version of the story arc. The technique I use to allow emergent storytelling is something I call a "story web."

My approach is geographical - location based, rather than event based. I begin by sketching out a map of the playspace within which the campaign will launch (a "sandbox"), and developing about ten to twenty points of interest within it. If you're running D&D, the sandbox could be a wilderness map with 6-mile hexes, similar to the recent Points of Light accessory. If you were playing Classic Traveller, it could be a sub-sector map of star systems. For Call of Cthulhu, it might be a map of London circa 1929. Each point of interest in the sandbox initially gets a paragraph of description.

The actual process of creating the points of interest is a mix of free-form creativity, adaptation/borrowing of other published material, rolls on random encounter charts, or other techniques. Here's an example from my own campaign of a point of interest, #18: Shrine of the White Lady:

Hidden in a secluded forest clearing is an ivy- covered shrine of white marble, sacred to Mityara, built by the dawn elves before the Argollëan War. The shrine is guarded by a unicorn. Within the shrine is a pool of crystal clear water. Characters who drink from the waters enjoy the benefits of a cure serious wounds spell.

Once I've sketched out my points of interest, I go back and I look for possible links between them - proximity, shared history, etc. The idea is that since story is going to emerge from the characters encountering interesting stuff, the story web should help them move from one point of interest to another.

In my ongoing D&D campaign, my initial points of interest included four different ruins that were all historically linked to the fallen elven kingdom. I decided to link them in game by placing a special pool in each location that showed where the other ruins could be found:

Other ways players could uncover links between locations in my sandbox include finding treasure maps in hoards that lead to another point of interest; rescuing captives that hail from another place; translating hieroglyphic carvings on the wall that mention another point of interest; reading NPC journals about other locations; talking to NPCs who traveled between the two locations; and so on. (If any of you have ever designed a computer RPG or MMOG, of course, you'll note that the above process is not that far removed from how quest chains are created.)

Because D&D is very sensitive to the level of characters, I structured my initial story web such that the interlinked web did not have any direct links from low to high level location. Since the web is essentially a road map of interest for the players, you don't want to purposefully lead them to destruction. This "bundled" structure of linking is also beneficial in that you can launch the campaign with only 3-4 of the points of interest ready in detail, rather than having to get all of them done up front.

What contrasts the story web from the story arc is that it offers two different layers of choice. The first layer of choice is that at any point the party has multiple threads of the web to pursue. Do they want to see where the treasure map leads, or visit the elven ruins they learned about from the mosaic? The second layer of choice is the ability for the party to ignore the web entirely. Since the points of interest exist independently as locations in my game world, the party can go explore as it would like. In short, the story web is a map to a destination, not a railroad track there.