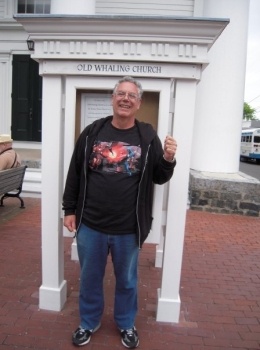 "I swear on a stack of D&D manuals that my only intention at the time was to write this tale and be done with it."

DiTillio's full account of how, as he puts it, "I stepped into hell" is beyond the scope of this article. Some highlights:

• "How the hell are a bunch of CoC investigators going to wind up in Africa in the first place? I began to research exactly how the overseas trip might work. First stop would probably be making their way [from New York] to England ...
• "An Egyptian story [by Lovecraft] got me excited about adding Egypt to the trip and working in the Black Pharaoh identity - and hell, it was on the way to Kenya, yes?
• "I was also fascinated by the City of the Great Ones [in Lovecraft's The Shadow Out of Time], and that prompted me to add Australia ...
• "Ah, what the hell, let's do some investigating in China, in order to work in the Bloated Woman avatar of Nyarlathotep."

It took DiTillio eight months to write the 400-page Masks manuscript, "all on an IBM selectric typewriter, which of course blew up the first time I typed the name of Hastur the Unspeakable. I took this as a warning, got the machine fixed and finished it, never, ever again mentioning Hastur. -Oh damn, the screen just went dead!"

When developer Lynn Willis fleshed out DiTillio's manuscript with extensive background on the various countries - laws, travel info, currency, languages - Masks of Nyarlathotep grew too long for Chaosium to publish intact. The first published version omitted Australia - a "dagger to the heart," says DiTillio. But "it sold like wanshi pancakes, and over the years it was reprinted several times." The third version (1996) finally reinstated Australia.

Because of the scenario's length, Chaosium has always had trouble keeping it available. At the moment, Masks is out of print, though the company still sells the .PDF version.

DiTillio says, "My proudest moment with Masks was when I gave it to Robert Bloch (author of Psycho). He had actually corresponded with Lovecraft in his youth. I beamed as he said he had heard of it and was happy to get a copy. Then came the unthinkable. He asked me to autograph it. Robert Bloch, a true Grandmaster of Horror writing - Robert Bloch, who had written a slew of Mythos tales himself - was asking for my autograph! Wowsers!"

Some gamers, including DiTillio himself, claim Masks isn't even his best work. That honor usually goes to The Grey Knight, a 1986 scenario for the first edition of Chaosium's King Arthur Pendragon RPG. A marvelous evocation of Arthurian myth in the mode of Thomas Malory, The Grey Knight recasts the medieval poem Sir Gawain and the Green Knight as a rescue mission to find one of the Thirteen Treasures of Britain in order to save Gawain's life, and King Arthur's honor, from a mysterious magical figure.

"I included gobs of Arthurian characters and events, straight from my readings. The linchpin of the scenario is the May Babies massacre, a black mark on Arthur's character that the player knights must prove false. It's a task that tests virtually every aspect of the player characters and allows them to use many of the game's skills to succeed. I am a big fan of this approach. Yeah, fighting monsters is fun, but there is a lot more to roleplaying, and Pendragon was an excellent venue for that.