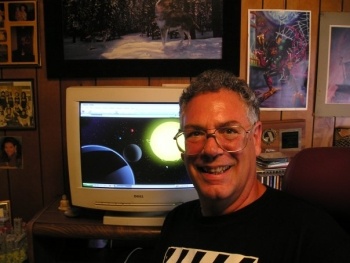 "The Grey Knight utilized one of my favorite game tactics - unbeatable opponents. The Grey Knight himself is unkillable, and the Sluagh are not only unkillable but inescapable as well. Do I do this just to be an evil GM? No. I do it to make players think beyond their weapons, recognize the futility of combat in resolving the situation and turn to roleplaying to solve it.

"My other common tactic is NPCs, a ton of them, most of them designed to create interesting noncombat encounters that don't involve a length of cold steel. In Grey Knight the players hobnob and gambol with almost all the major characters from the Arthurian legends. This in turn provides atmosphere, another key factor in roleplaying.

"The final ingredient I try to insert in a scenario is simple: high stakes. If the players fail to achieve the goal, King Arthur's reputation is ruined and all of Camelot is in peril. If you're going to make players undertake a task, make it important. If they succeed, they'll be telling their own legends in years to come - and if they fail, well, they're still heroes for trying."

DiTillio's other major game work appeared in Demon Magic: The Second Stormbringer Companion, a 1985 supplement for Chaosium's fantasy RPG based on Michael Moorcock's Elric stories. "My contribution was 'The Velvet Circle,' the closing scenario. The Velvet Circle is a walled red-light district in Ilmar replete with inns, taverns, brothels, gambling parlors and even a cockfighting establishment. In short, a roleplayer's paradise! The player characters are drawn to it by strange dreams, always ending in the words 'Velvet Circle, Bright Dawn.' Though each dream ended the same, all of them were different, and each provided a player with special clues to later happenings in the scenario. This is an excellent way to multi-task your handouts. Dreams are a facet of game design I use often." In this scenario DiTillio masters the Moorcockian atmosphere as completely as his other work captures Lovecraft and Malory.

DiTillio said in a 2003 Comics Bulletin interview he would rewrite every one of his TV scripts if he could, but he is quite satisfied with his RPG scenarios. "I didn't write them just to sell them, I wrote them to play them. It's in the playing that game work comes to life, so I tend to remember more about my game scenarios than I sometimes do with TV scripts I've had produced." Unlike in television, "You don't have a passel of corporate dodos overseeing your writing. You're more in control, so you do what you like. [And] Chaosium and Flying Buffalo both had excellent graphic people to really spiff up my writing." Most important, he had plenty of time. "You need to finish a TV script very quickly - one or two weeks at most and then you're on to the next one. Game work lacks that speed factor."

High Adventure columnist James Maliszewski, in a Grognardia blog entry praising Masks, said, "Larry's name is associated with some of the best adventures ever produced for many game lines. He's one of those rare designers who both understands what makes a good RPG adventure and how to plant the seeds for creating memorable stories with those adventures. Lots of designers err too much on one side of the equation or the other; it's a testament to Larry's skills that he got it right so often."