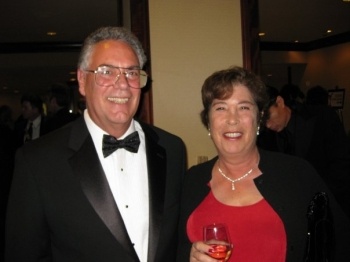 Larry DiTillio with his wife, Marjorie Goldman, at the 2009 WGA Awards ceremony in February 2009, where DiTillio received the Morgan Cox Award

For all this, DiTillio's Wikipedia entry barely mentions his gaming work. Even while Masks was redefining the roleplaying field's sense of the possible, he had already moved on to writing TV scripts full-time.

"It was game work that started my animation career, via Michael Halperin, who did the show bible for the original He-Man and The Masters of the Universe. Michael was a friend of mine at the Writer's Guild, and his sons played D&D. One day he was browsing their Dragon magazine and saw my name on a scenario." ["CHAGMAT," Dragon #63, July 1982.] He called me up and said 'Larry, I didn't know you wrote sword-and-sorcery.' He said to call Arthur Nadel at Filmation and pitch him some stories. That led to a staff job and an entirely new career in writing. No Dragon magazine, no job at Filmation. And a good lesson - you want to be a writer, get published anywhere you can!

"I worked [at Filmation] a few years on He-Man, She-Ra, Fat Albert and the Cosby Kids, and did treatments for new cartoon series. The most exciting was Dragonriders of Pern, the Anne McCaffrey series, and I had many pleasant chats with her. We never did sell it, but she did use some of what I had created in her next Dragonriders novel and was nice enough to credit me for it."

DiTillio went on to write over 150 animation scripts. After writing 16 episodes of He-Man and the Masters of the Universe, he created the spinoff series She-Ra: Princess of Power. Later he served as story editor for the first two seasons of J. Michael Straczynski's epic science fiction series Babylon 5, then (with Bob Forward) for Beast Wars: Transformers. He had a long stint co-hosting the Los Angeles science-fiction radio interview program Hour 25, wrote many Scripts columns for Writer's Digest and was active in the Writers Guild of America West organization. In February 2009 the WGA West awarded DiTillio its Morgan Cox Award for his long work improving working conditions for his fellow writers.

DiTillio still writes games for his own use, and would willingly return to the RPG field. "I'm a professional writer, who will listen to any offer of paid work. I did create my own system and world, Cerilon, and I'd love to get that published. Nudge nudge, wink wink."

He developed Cerilon, a percentile-based fantasy RPG system derived from D&D and RuneQuest, when he tired of "constantly checking charts and tables for every damn move anyone made. Everything players needed to know about the system was right on the character sheet. No more checking rulebooks or tables, just act and roll. My notion of roleplaying is that it should be cinematic. The more time spent rules-lawyering, the more boring the game! Flow is what you want.

"[Cerilon] has a very diverse population that mirrors our real world. I found most fantasy games to be too white-bread, so I folded in black people, blue people, red, yellow, etc. Each race had its own culture and customs, culled from lots of reading on African, Asian and Native American mythologies. I did include elves, dwarves and hobbits, though I did not adhere to the typical Tolkien paradigm of these kindred races. Typically for me, it's a very adult world; Love-making and Flirting are both popular skills. The adventures ranged from small forays to full scale wars, and I wrote a ton of them, more than enough to play for several years.

"I host a night of board and card games every Saturday, but no roleplay. Too busy with life. I roleplay at game cons, either playing in games or running them." DiTillio currently runs a comedic CoC campaign that may remind longtime fans of Chaosium's camp B-movie Blood Brothers scenario collections. DiTillio's "Abbott and Cthulhu" is a 1940s funfest starring Abbott and Costello, inspired by Abbott & Costello Meet Frankenstein ("In my estimation their best picture").

"It's normal Cthulhu rules, but all the characters are '40s movie stars. For example, Sam Marlowe, P.I., is Humphrey Bogart; his sidekick Joel Gaza is Peter Lorre; Madame Gavoni is Maria Ouspenskaya (the old gypsy woman from the original Wolf Man movie); and last year I added Larry Talbot (played by Lon Chaney Jr.), the original Wolf Man. Villains are played by people like Sydney Greenstreet, Vincent Price, Boris Karloff, etc. You'd be amazed how great Cthulhu and humor mix. My hope is to one day run an all-comics 'Abbott & Cthulhu,' adding the Marx Brothers, Laurel & Hardy and the Three Stooges to the mix. Cthulhu won't stand a chance..."

Writer and game designer Allen Varney has written over 70 articles for The Escapist.