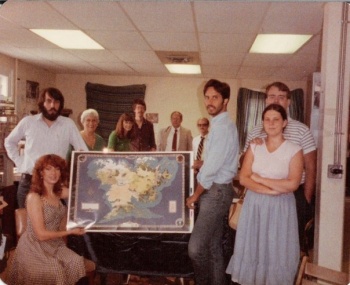 Pete Fenlon joined his longtime friend Jordan Weisman, then Creative Director of Microsoft's Entertainment Division, as content lead on a novel publicity venture promoting the Steven Spielberg film A.I. A small team including Microsoft game designer Elan Lee and led by science fiction novelist Sean Stewart ran the online project code-named "The Beast" for three months in 2001. It proved to be the seminal Alternate Reality Game. Its main creators, called "Puppetmasters," all went on to further ARG projects. With ex-Kesmai and ex-EA developers, Fenlon created a software house called Castle Hill Studios, which developed a suite of tools useful for running ARGs. Castle Hill also developed an online version of the game that next consumed Fenlon's attention: Settlers of Catan.

In July 2007, Fenlon took over from Will Niebling as Mayfair's CEO and studio director. Capitalizing on his friendship with Catan's designer, Klaus Teuber - they had much in common, having grown up in the same area of Germany - Fenlon began executing "a vision we'd been talking about for some time." He updated the Catan packaging and reorganized the company's entire portfolio around the game. Mayfair has now published multiple versions and over 20 Catan spinoffs. Catan GmbH is a Mayfair partner, and Teuber's son Guido is a director at the company.

How many Settlers games has Mayfair sold? "Only a million so far," says Fenlon philosophically, but he sees much larger numbers ahead. In March 2010, he ordered a new Settlers of Catan printing of 200,000 copies, enough to last, he hopes, six to eight months.

Nowadays Mayfair Games is a distributed company with employees across the US and overseas. Fenlon still lives in Charlottesville with his wife, Olivia Johnston, and works at Mayfair's downtown design studio - his former Castle Hill building - with a fine view of Monticello. His Publishing Director there is longtime Rolemaster/MERP designer Coleman Charlton. Fenlon doesn't draw maps much any more, but as Visual Director he closely supervises the trade dress of each Mayfair release.

Undaunted by past financial ordeals, Fenlon remains ambitious and optimistic. He outlined his vision for Mayfair in a 2008 Pulp Gamer podcast interview: "We would like to be one of the largest parlor game/social game publishers in the world for as long as time permits. We want to establish ourselves as an enduring brand. Generations in the future, people will look back and say, 'This is an American classic.' It's an ambitious but very doable mission."

Writer and game designer Allen Varney has written over 70 articles for The Escapist. Thanks to Shannon Appelcline of RPG.net for his valuable histories of Iron Crown (1980-93 and 1993-present).