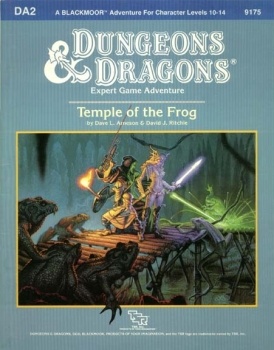 Every book about Satanic ritual abuse has been discredited. Of the crimes and suicides that supposedly implicated D&D, almost all cases fell apart on examination; a small number are still debated. In the mid-'90s, people whose lives were ruined by SRA accusations sued psychiatrists and psychologists on charges of propagating false memory syndrome. Some of these suits were successful or settled out of court. Today SRA as a legal charge has basically vanished.

On their 1996 album Take Down The Grand Master, the Wisconsin comedy group Dead Alewives presented a "Satanic D&D" parody, sometimes known as "Summoner Geeks" or "Attacking the Darkness," that became just about the only good result of the entire panic.

By 1999, with the Columbine High School massacre, the industry learned how to turn the tide. Early Washington Post stories directly linked the shootings to RPGs. Stackpole, consulting with D&D's new publisher, Wizards of the Coast, advocated directly challenging the Post to source its allegations. Music and games marketer Jenny Bendel, working public relations for Wizards, answered journalist calls. "I would say, 'Okay, you've played D&D, right? Are you really going to rush out a "Blame D&D" story when you yourself know that's ridiculous and so '80s?' It worked - most journalists I spoke with backed off." The process took three days. "Until the Post removed gaming mentions from the story, we had serious trouble," Stackpole recalls. "The Post's stories were getting picked up all over the place, which could have become a dangerous and lasting negative legacy."

(Bendel now organizes publicity and fundraises for the West Memphis 3, teens convicted of murder in 1994 on debatable evidence reminiscent of the Satanic Panic.)

Some gamers, noticing tabletop roleplayers are now mostly grownups, envision a revival of 1970s pre-Panic sensibilities, a return to days when the Monster Manual could show a succubus without a national uproar. In his article "Naked Went the Gamer" for the Old School Revival fanzine Fight On, Ron Edwards, designer of the fine indie RPG Sorcerer and admin at The Forge, addressed the hobby's continuing capitulation to the "sudden national hysteria" of the 1980s:

[D]istributors of books, movies, comics, and games fell all over themselves trying to prove that the products were innocent of all intent or content to offend [...] newly organized roleplaying hobbyists performed a huge, collective flinch. Instead of defying the pressure, they apologized. [...]

I simply and fully condemn such actions, and it's nothing to do with ["Your Mileage May Vary"], but because doing this is wrong. Why, if you concede that others' mileage may vary, do you dial it back? Why do their preferences prevail? [...] Who are you trying to protect? Yourself? Your store owner? "The hobby"? Pah!

Allen Varney has written 75 articles for The Escapist. See the complete list at Great Games Experiment.