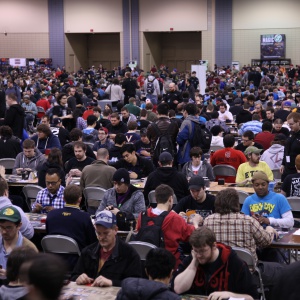 Last weekend, 4,304 Magic: The Gathering players descended on Richmond, Virginia for GP Richmond, and that's just the number of players registered for the main event. That doesn't take into account all the folks who simply showed up to play side events, trade and otherwise hang out and battle. 4,300 is actually only a few hundred shy of the largest Magic event ever, which is still being held by the ~4,500 players that attended GP Las Vegas. Considering that Richmond was constructed, not limited, it's pretty damn impressive that it came so close.

The format for GP Richmond was Modern, which has rapidly become my favorite format. For those unfamiliar, Modern is a format that grew out of and replaced the older Extended format. It's a non-rotating constructed format made up of all the cards from Eighth Edition onward. Combined with a slightly heavy handed approach to banning, Modern exists at this interesting power level between Standard and older eternal formats like Legacy. You still get to play some pretty sweet cards, but you don't need to quite worry about stuff like Emrakul, the Aeons Torn being Sneak Attacked into play or a True-Name Nemesis picking up an Umezawa's Jitte.

What's been particularly interesting about Modern recently has been the banned list changes. Deathrite Shaman got the axe while Bitterblossom and Wild Nacatl were put back on to legal status. A couple weeks of hindsight and the effects have more or less fully panned out. Bitterblossom has failed to make a major impact. Wild Nacatl has certainly re-fueled the Zoo archtype, but it's an easy enough deck to prepare for. And the removal of Deathrite Shaman has spurned many of the graveyard based decks back to popularity, or simply made them a bit more consistently powerful.

Top 8 ultimately consisted of 5 Birthing Pod decks, 2 affinity and a single Splinter Twin combo deck. While it's a little disappointing to not see anything spicy in the Top 8, it's not terribly surprising. GPs are extremely long events, 15 rounds, and with 4,300 players you might not even make Top 8 with an X-2 record. So often the most consistent decks that play well against a variety of strategies tend to bubble to the top.

Of my own personal musings, I find it fascinating how WotC has begun using Modern and the banned list a bit like patches for an RTS or MOBA title. Now certainly some bannings are due to outright degenerative power level, but lately they have been using it to let some steam out of anything that's become a bit to popular, not unlike how Riot Games might nerf the cooldown on an ability. They can to some extent dictate what the meta or environment will look like by validating or invalidating certain archtypes, strategies or cards.

As for the tournament itself, all things considered it went rather well, certainly in no small part due to the experience and professionalism of the tournament organizer StarCityGames. It seems like a lot of the TOs are learning from past mistakes and slip ups from when these events far exceed attendance expectations, but for GP Richmond everything seemed well in hand. Heck, it only started an hour late.

As for my personal tournament experience, before the event I had been hitting the local Grand Prix Trial circuit pretty hard. I finished in Top 8 for most of them, even played in the finals for 2 events, but 1st place and 2 byes for GP Richmond eluded me. So I was heading to Richmond with just my 1 seasonal bye. Byes, for those who haven't played much tournament Magic, are free wins at the start of the event. They are most often used when you have an uneven number of players, but they are also assigned to reward dedicated players. Not only do you get a free win, but that bye player is assumed to have gone on to win all their matches. This becomes very important for tie breakers down the line. 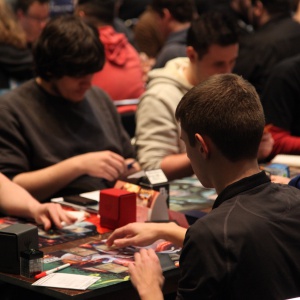 Right before the event, I had been waffling between the Slippery Bogle deck that I had been playing successfully at smaller events and a new Grixis Splinter Twin deck. Bogle had a strong showing at the recent Pro Tour, though ultimately didn't take the event. But in a way that was good because the UWR deck that did win was a strong match-up. I decided to stick with what I had been playing, and I ended up going 6-3, losing my win and in Round 9 for Day 2. Considering my goal for the tournament was simply to make Day 2, I wasn't too disappointed by the outcome.

All in all, GP Richmond was a ton of fun. I got to play Magic with a bunch of great folks and see the spectacle that is thousands of players battling in the same room. If there's a GP coming through your area, I'd recommend checking it out.