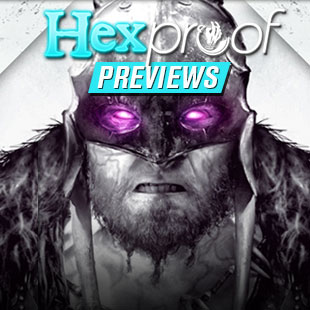 Ever since we've been getting Magic in digital format with Duels of the Planeswalkers, all of Magic fandom has cried out for one thing: Custom decks. It has arrived.

Magic 2015 - Duels of the Planeswalkers will include custom deckbuilding, and as I saw during my hands-on time with the game at PAX East 2014, it's not half baked either. The game will have "more than 300" cards, including some from the Magic 2015 core set, according to a Wizards of the Coast representative, and allow full customizability all the way down to the number of lands in your deck. Additionally, there will be 30 slots for different decks - a huge step forward for the series.

Wizards placed quite a bit of emphasis on the game's ability to auto-complete decks as well - you can put in a handful of cards you want, and the game will then finish your deck with the push of a button. The game designers in R&D for the tabletop version of Magic had a hand in that algorithm, so hopefully it can be trusted to deliver usable decks for new players or those less committed to having the perfect deck. It's definitely part of Wizards' choice to make DotP the best way for new players to find out about Magic in a relatively safe environment, compared to getting stomped at your local Friday Night Magic for a few months in a row - though it's possible that there will be some kind of promotion for completing DotP, like a free pack of cards at your local store.

I was very impressed by improvements to the game's interface design, with a very clean black-and-white setup allowing the outstanding art Magic is known for to take the fore. Additionally, easy to use sorting features allowed you to sort your pool of available cards down to a manageable size for deckbuilding. Players on consoles and tablets should also really appreciate that, as the Magic 2014 interface was a little too cluttered with extra information for my liking.

When you begin the game, you'll choose an initial two colors, thereby corresponding to one of Ravnica's guilds, and unlock more as you go. From there, as your journey through planes, you'll unlock something like 3-6 cards per battle until you've got the entire suite available to you. Custom deckbuilding, though, will be available "almost immediately" when you start playing the game.

The storyline itself will focus on iconic Green Planeswalker Garruk, and as you play you'll be investigating why Garruk, a renowned hunter, has suddenly decided that his favorite prey is other Planeswalkers. There will be a few cutscenes around to stitch the story together, but for the most part the game focuses on the cards. As you go, you'll jump from plane to plane, traveling through at least Innistrad, Theros, Ravnica, Zendikar, and, nostalgically to me at least, Shandalar. As you go through each plane, you'll unlock only cards from that plane's sets in the tabletop game - which is a nice touch for Magic veterans but probably won't mean anything to most digital Magic players.

In the end, some of the negatives from previous editions will remain: There won't be cross platform play, and Archenemy won't be returning. Challenges and Archenemy won't be in the game initially, but haven't been "ruled out" - take that as you will. Overall, it looks like the 2015 version of DotP will be what Magic fans have wanted in the computer game version for a long time. We'll find out for sure this Summer.