Over the next few weeks, we here at The Escapist will be playing an informal draft tournament of Journey Into Nyx. To kick it off, we'll looking at a few packs and seeing what three of our various Magic players would pick. We'll have perspectives from Josh Vanderwall, Magic Judge and regular hexproof writer, Justin Clouse, the office's competitive Magic player, and myself, Jon Bolding. I'll call myself "The Rookie," because while I played magic for years, that was over a decade ago. There's a lot to learn and re-learn.

Without further ado, here's the first pack we opened: 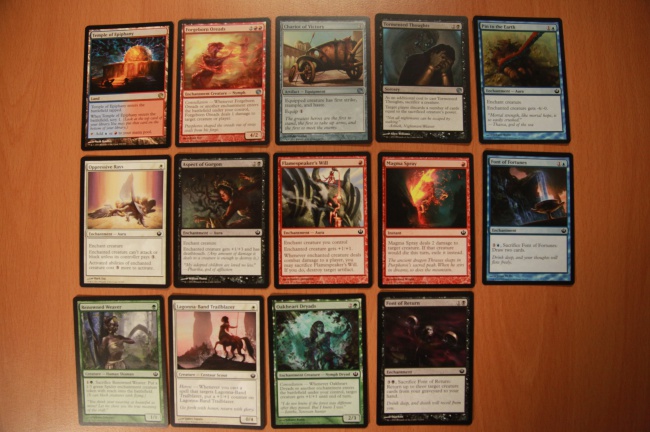 Enchantments:
Aspect of Gorgon
Font of Fortunes
Font of Return
Oppressive Rays
Pin to the Earth
Flamespeaker's Will

This pack is pretty weak, none of the creatures are of a high quality, but there's a few decent removal spells. The best picks here are Oppressive Rays, Pin to the Earth and Magma Spray with Magma Spray being in a slight lead. Of those three though Oppressive Rays basically cuts the whole pack on white, and it's my pick here. It leaves only a pretty unexciting Lagonna-Band Trailblazer, and this will send a strong signal that may pay off as the draft continues. Signals shouldn't always be the first consideration, but they are useful when splitting the difference on similar picks.

Oppressive Rays isn't very mana intensive, so you can easily splash it with any kind of fixing. It doesn't commit you to a color, but it's fairly solid and reliable quasi-removal. If nothing else, you can force your opponent to commit their turn to attacking or blocking, rather than casting spells to further their position. It's not amazing by any means, but it's a solid first pick that keeps your options open.

I'd be tempted to take Temple of Epiphany, because the scry and dual colors make for a great UR mana base, but this does sort of commit you to one color or the other (or both) which isn't necessarily ideal when you have no idea what other people are drafting or what the rest of the packs might offer. Magma Spray is another decent-looking option, but the 2-damage burn just won't reliably kill enough things to count on. Oppressive Rays incapacitates virtually anything, barring your opponent having a billion mana to play with, and removal is crucial in limited formats, so that's almost certainly where I'd want to be.

My gut says I should take Temple of Epiphany. My thinking is that it gives me a strong UR mana pump - and one of my strongest playstyles is UR. However, I'd have a bit of fear that I'm locking into a style of play too early in the draft. It's clear that oppressive rays is a good choice, and strong removal, and throwing a small sideline into white wouldn't be hard in Journey Into Nyx, which has quite a few decent low cost white cards.

In the end, I'd take Temple of Epiphany. I think that taking a few strong red and blue cards over the next few picks would signal to the player near me that I'm going into them, giving me an edge. In reality, I can't ignore a strong mana base - managing that is one of my favorite Magic experiences and my decks tend to be strong there. In the end, if one of my many cards ends up being a land I don't use, I can take that hit. The opportunity to build a deck that controls the field is too tempting to pass up.

Check back next week for analysis of a few more draft packs, and in the following weeks for the decks we actually drafted, as well as how they performed in play.