If you didn't already know, for the Magic 2015 Core Set Wizards of the Coast conscripted a number of video game designers and other folks around the industry to develop a few cards. Magic shares a nerdy Venn Diagram with video games pretty heavily, so it's not surprise that many of our favorite creators also have a love for the game. From Markus "Notch" Persson and Minecraft to Brian Fargo and Fallout, there's a pretty eclectic bunch gathered with some honestly interesting cards on display. If nothing else, it's a nice shot in the arm for a core set, which is typically weighted to have simpler, easy to grasp cards for new players. Here are a few of my favorites so far. 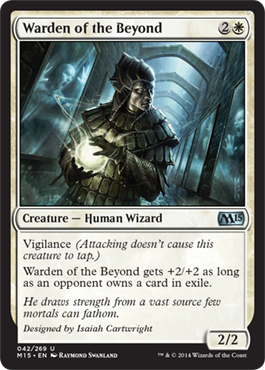 Warden of the Beyond

This card comes to us from Isaiah Cartwright, lead designer for Guild Wars 2 at Arenanet, which is a game I really dig. Starting out, a 2/2 Vigilance for 3 is at least limited playable. It's not an exciting card, but Gray Ogre sized creatures are a begrudging 23rd card sometimes. The real value comes from how often you can enable its second ability, and white is flush with cards like Banisher Priest, Path to Exile and Oblivion Ring. A 4/4 for 3 is a much better cost ratio, it's going to be bigger than practically anything else at that cost and it gets to play offense and defense with its Vigilance. Warden of the Beyond can even to move to attacks and then contribute to Devouring Light for some blow out potential. That it's also a Human, a pretty relevant creature type that is in the market for aggressive cards, and you've got some true potential here. Just how good it is will depend a lot on the format and what cards are available. If something like Journey to Nowhere, which would play well with Theros block, got reprinted when combined with existing exile effects this could be Standard constructed playable. 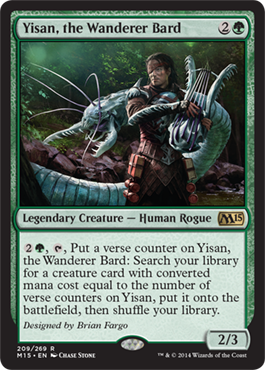 Brian Fargo: He's worked on a few games you might have heard of. Do Fallout, Wasteland or a little company called Interplay ring any bells? He's currently working on a new Wasteland and Torment, fueled by Kickstarters. The 2/3 body for 3 is already decent enough. This could easily have been a 1/1 as most Elvish Piper-type cards tend to be. It's not surprising that these highlight worthy cards are all a little pushed. While you don't get to just start dropping big creatures, you're going to accrue a lot of value along the way. I think the 3 casting cost is what really seals the deal together though. I imagine a lot of games will go: Turn 1 mana accelerant like Birds of Paradise, Turn 2 Yisan, the Wanderer Bard, Turn 3 activate Yisan, the Wanderer Bard to get one of your other 1 mana accelerants. Now you have 6 mana on Turn 4 with a decent boardstate, and you can keep grinding value with Yisan, the Wanderer Bard or switch to dropping ramped out spells. I certainly see it getting played in Commander and might even sneak into other constructed formats. Am I insane to think that modern Birthing Pod decks might want this as another way to grind in the long games? 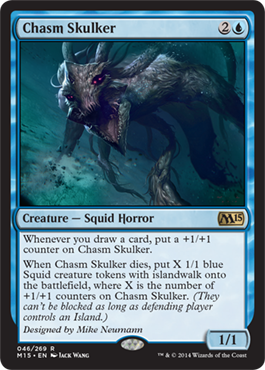 Mike Neumann should be a name familiar to fans of Borderlands - he wrote it. He also starred in a video series we ran here on the site, Anthony Saves the World. Chasm Skulker looks pretty innocuous on the surface. A 1/1 for 3 isn't exactly great, and it would take several turns for the +1/+1 counters to grow it to size. However, this is a card like Deathrite Shaman where it shines in older formats. Chasm Skulker can get quite out of hand once you start combining it with the likes of Brainstorm or Wheel of Fate style cards. What's great is that even as you're investing in these interactions Chasm Skulker is banking some insurance for you in that if it gets killed you still maintain a boardstate. Hell, there will even be times when your opponent would rather you have a giant single creature instead of a bunch of potentially evasive tokens (Psst, I hear Blue is a pretty popular color in old formats.) Also, squid tokens. You can get lots of them. Just saying. Squids.