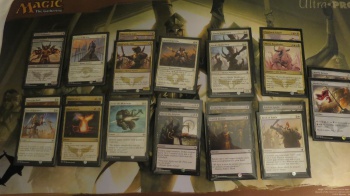 Just after the three Draft rounds on Day Two of Pro Tour Khans of Tarkir in Honolulu, Wizards of the Coast arranged for a friendly round of Draft between attending press and dropped pro players. With three pro players - two of which are Hall of Famers - and four press in attendance, the Wizards Brand team filled the gap, and we set about cracking some packs of Khans of Tarkir. Roberto Gonzales, Brian Kibler, and Frank Karsten made up the "Pros," alongside the tag-teaming Brand Team duo, Liz and April.

I drafted Mardu Warriors, and it was good. I managed to win a couple of matches, including a turn five kill thanks to Rush of Battle on turn four and Raiders' Spoils on turn five. I thought I was doing fairly well against Hall of Famer Frank Karsten, but two games in a row, he morphed his way to victory, once my aggressive start stalled out. It's hard to feel bad about losing to such a renowned player, even if I was hoping for a little more out of my deck. Check out my build and let me know what you think in the forums. It's got an aggressive early game which feeds into five or so removal spells, but it just wasn't enough to go the distance. Although, I will say that getting two Mardu Skullhunters to proc Raid on the same turn feels particularly good.

Over the course of the showdown, I even managed to almost-but-not-quite stump our overseeing Judge, Eric Levine. Brave the Sands was my 23rd spell, and proved to make for hilarious blocking situations, as it allows each of my creatures to block an additional attacker. "What happens if I block both of the attacking creatures with all three of my blockers?" I wondered aloud. Levine gave a huge grin, "I think I know, but I better check. I like giving correct answers," he replied. Despite going 2-2 on my matches, I was proud just to have presented a high-level multi-Pro-Tour Judge a situation he'd never seen before. Drafting with pro players is a little daunting, but every single one of them was incredibly friendly and personable, so it felt more like drafting casually with a group of friends at the kitchen table than in a side room at the Pro Tour with Magic Hall of Famers.


Afterwards, I went back to the tournament area to check in on the proceedings, and despite the growing lethargy in the room, the matches were still incredibly intense. I meandered around the play area, snapping a few photos, and watching some of the games, waiting to see what kind of decks would make it to Sunday's Top 8. I was not disappointed when the results finally came in.


Full disclosure: I've been aligned with Jeskai since I identified Red, White and Blue as the clan colors. I love burn, I love control, and the possibility of a counter-burn control deck made me giddy. I even took it upon myself to build out a Jeskai Ascendancy combo deck last week, which is admittedly sub-optimal, but still a ton of fun to play. When I saw that four of the Top 8 decks were Jeskai, and that Combo was a legitimate strategy in Standard, I got giddy all over again.

Check out the full decklists for Sunday's Top 8. Abzan and Jeskai clans dominate the top spots, with three and four decks respectively. Impressively, a Dimir (Blue/Black) control deck has proven to be a real thing as well, which took me a little by surprise, though may not be as surprising to those who are truly in the know.

What does this mean for FNM for the next few months? Honestly, probably not much new. Abzan and Jeskai were basically the most popular clan decks out there, so you'll continue to see plenty of them every week. The Jeskai Combo deck making it to the Top 8, however, likely means that you'll be seeing quite a few more of those from players who like to cast cantrips until they win the game.


The final rounds of Pro Tour Khans start soon, and Wizards will have all the real-time coverage you can possibly handle right here.

What do you think of the Top 8 lists? Is there anything you were hoping would make it that didn't, or have you been rooting for Jeskai all along? Does Ascendancy combo have what it takes in a field of Mantis Riders and Siege Rhinos?