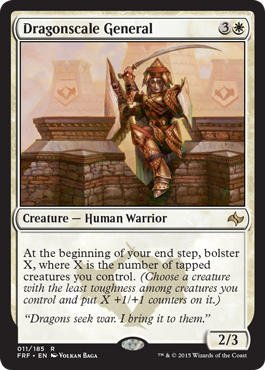 Last week, we talked a bit about Fate Reforged's big, bad Planeswalker, Ugin, the Spirit Dragon, but with pre-release only days away, we should probably talk about the stuff you'll actually see this weekend. Each set comes with a handful of new mechanics, and Fate Reforged is no exception. It won't have quite as many brand new mechanics as Khans of Tarkir did, but it's good to know what you're getting into all the same, so let's get to it!

Abzan's (White, Black, Green) latest trick aims to shore up the weakest link among your creatures, reading, "Choose a creature with the least toughness among creatures you control and put X +1/+1 counters on it." Dragonscale General is particularly impressive, allowing you to swing out with the majority of your team, leaving the smallest one behind to get Bolstered at end of turn.

The majority of Bolster effects are attached to creatures, but there are a handful of Instants with the keyword that you can use as combat tricks. The 4 life from Honor's Reward isn't exactly game breaking on its own, but if you can set up a situation where the Bolster gets applies mid-combat, and you can make a now-favorable block, it will no doubt have a much more significant impact on the game. 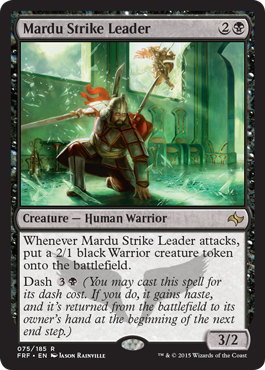 Mardu's (White, Black, Red) Dash is one of my favorites among the new mechanics. Dash has a cost associated with it, and reads, "You may cast this spell for its Dash cost. If you do, it gains Haste, and it's returned from the battlefield to its owner's hand at the beginning of the next End Step."

Dash creatures like Mardu Strike Leader typically come with a "Whenever this creature attacks" ability, like the Strike Leader's "put a 2/1 black Warrior creature token onto the battlefield." Although, my personal favorite of the Dash dudes is Flamerush Rider who actually creates a copy of your meanest attacker whenever he attacks. Unfortunately, he can't copy other "whenever this creature attacks" abilities, since the copy was never declared as an attacker, but piling on a little extra damage each turn certainly seems in line with the Mardu philosophy. Being immune to sorcery-speed removal when utilizing Dash is just icing on the cake. 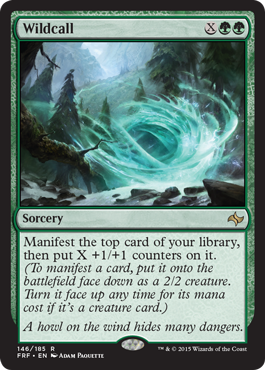 The Manifest mechanic isn't associated with a clan, instead being aligned directly with Ugin. It reads, "To Manifest a card, put it onto the battlefield face down as a 2/2 creature. Turn it face up any time for its mana cost if it's a creature card."

Since Manifest most frequently affects the cards on top of your Library, it's actually a surprisingly cheap means of gaining card advantage. Even if they're easily killed, the Morph creatures that result from Manifest give you a board presence as well as card advantage, particularly in more creature-heavy decks.

With cards like Wildcall, your Manifest creature will get some extra +1/+1 counters, which stick around when you turn it face up, garnering some additional value. Most of these spells are Sorceries, unfortunately, so they won't be useable as combat tricks.

That's more or less all you'll need to know in advance of this weekend's pre-release events! Check back later in the week when Justin Clouse and I discuss the finer points of the set in terms of their viability in Limited formats!