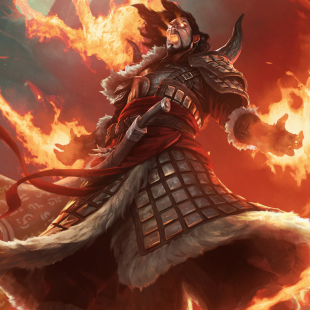 Last weekend I had the pleasure of attending Star City Game's Washington DC Open, which was the first major tournament with Magic: The Gathering Fate Reforged cards being legal. Washington DC is well within bearable driving distances - I used to live near there as well, and these first tournaments with new cards are tons of fun to play in because of the wide variety of decks you get to see and play against. While there were certainly plenty of existing decks getting upgrades, the new Fate Reforged cards revitalized some underplayed decks and there were even a few really crazy things present. Well, crazy for Standard at least.

Thinking that everyone would want to play with new powerful cards, but the decks would be a little under-tuned, and also the relative lack of sweeper control decks in the current metagame, I opted to play Mono-Green Devotion splashing for Villainous Wealth and Doomwake Giant. Late into Day 1, I ended up punting a game that drew the match, which promptly tossed me into the draw bracket with the control decks I didn't want to play against. I ended up missing out on Day 2 with a record of 5-3-1.

While I was certainly kicking myself for my mistake, I did have a lot of fun playing and there were a bunch of cool Fate Reforged cards making an impact on Standard. Here are the ones that stood out.

Tasigur, the Golden Fang was the card that impressed me the most. While I think the verdict is still out on what the best home for Tasigur, the Golden Fang is, I saw a lot of awkwardly-returning, low-impact stuff like Sylvan Caryatid, the card looked to be performing well in everything from control decks, to dedicated delve decks, and even aggressively leaning mid-range. The 4/5 body lines up really well as just another Siege Rhino, and if you can get the ability online for relevant cards Tasigur, the Golden Fang grinds out advantage. There's a reason why this card has shot up to $10.

Tasigur, the Golden Fang impressed me, but Temur Sabertooth was by far the coolest story out of the Washington DC Open. Granted Temur Sabertooth is just a cog in the larger machine, but the deck's plans was to get Temur Ascendancy and either Karametra's Acolyte or Voyaging Satyr with Nykthos, Shrine to Nyx into play. With enough green mana symbols, the deck can create infinite mana by returning either of the creatures to hand, recasting them, reusing their abilities, and then repeating the process, since Temur Ascendancy gives them haste. With those cards creating infinite mana, the deck can then simply kill you with a number of cards. Genesis Hydra can be bounced to draw the whole deck, Polukranos, World Eater can fight every creature and get gigantic, or Nylea, God of the Hunt can make all your creatures giant tramplers.

Initially, you wouldn't think that changing Reprisal to toughness and adding the ability to give indestructible would be that good, but this card was absolutely everywhere. The real clincher is that Valorous Stance hits the most played creatures in the format: Courser of Kruphix, Siege Rhino, and Wingmate Roc - though that last one isn't the best exchange. That it's able to do that and still have a relevant mode against more controlling decks with lots of removal means it's much harder for this card to be dead. Valorous Stance will continue to be all over the place, and it will probably start to find its way into other formats like Modern where it's pretty good at blowing up Tarmogoyf.

Let's face it, Ugin, the Spirit Dragon is just too powerful to not see play and being colorless certainly helps with that too. Josh wrote a longer write-up about Ugin that you can read here. For the most part, Ugin, the Spirit Dragon saw play out of pure control or very removal-heavy, mid-range decks where it could wipe the board clean and then take over the game. He was also topping off the curve on a few ramp-oriented strategies, either devotion based, with Nykthos, Shrine to Nyx, or relying on the new Frontier Siege. Several of the other sieges also put up good showings, insert "called it" here.

Similar to Ugin, the Spirit Dragon, Monastery Mentor just has a lot of power behind it. It also really helped that it was perhaps one of the most natural inclusions into existing decks. Even before Fate Reforged, there were plenty of spell-heavy Jeskai decks of varying styles running around. Whether it's abusing Jeskai Ascendancy or just playing a tempo game of sticking a threat while you constantly remove your opponent's blockers, Monastery Mentor provides plenty of board presence all by itself. It doesn't take long until you'll have a huge number of tokens and each spell is racking up massive extra damage.

Those were the five cards that really caught my attention. After last season's doldrum of Mono Blue, Mono Black, and Blue/White Control, Standard is perhaps the best it has ever been lately. If you've left playing Standard because the decks are not interesting enough, now is a great time to get back in. Or, if you're already playing, what Fate Reforged cards have you been having the most fun casting?