Prerelease is upon us this weekend, and a week from now Dragons of Tarkir will be legal for constructed play. There are a ton of powerful and interesting cards coming in this set. Heck, I'm still not certain what deck I want to be playing next weekend. Perhaps you're in a similar spot for Stanard or you just want to know what bombs to look out for this weekend? Here are a few cards to keep you eyes on that we think are exciting or interesting in some way.

Here's a little thought experiment, think of a three color card from Khans of Tarkir block. Now compare if that card shares a color with any of the targeted colors in this cycle. Yep, due to the way the Clan color wedges work, these cards will always hit any of the clan cards.

This really helps to maximize how often you can bring these cards in and should directly correlate to how much play they see. We saw a similar cycle in Theros block that hated against its own color. Compared to those card which saw a fair amount of sideboard play, this cycle can come in more often and safely take up more sideboard slots.

Rending Volley and Self-Inflicted Wound are the real standouts. I'm not looking forward to playing against a deck with both Self-Inflicted Wound and Crackling Doom. Display of Dominance is also really solid for all the mono-Green devotion shells that sometimes struggle against problematic cards like Ashiok, Nightmare Weaver that they previously only use combat damage to interact with.

Surge of Righteousness is decent enough and can help a control deck to stabilize or turn a race between aggro decks. Because it's attacking and blocking though its applications are more limited. Encase in Ice has the potential to be a blue Doom Blade, but there is a fair amount of enchantment removal in Standard right now. Though it could be good against a mono-Red deck which by nature have no ability to directly removal enchantments. 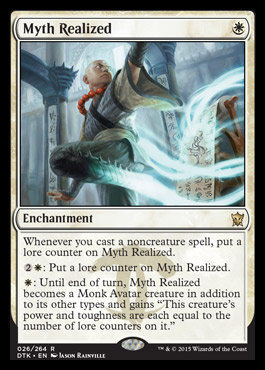 This is not some clunky, but flavorful, rare. Myth Realized is aggressively costed to make it viable in a deck that can make a good supporting shell around it. It quite literally can't be costed cheaper short of making it free or Phyrexian mana. It costs a single White to cast and a single White to make it into a creature. It can even grow, slowly, on its own.

It's very easy to see this showing up in control decks or token heavy builds where all your spells are growing it larger. Because you get to decide when it is a creature, that means Myth Realized plays very well with and against wrath spells. You can either activate it after you wrath the board and get in for damage or you might use it to pressure an opponent to have a removal spell for Myth Realized as well as the wrath they need.

Depending on the deck, you even get to play the sideboard shuffle with it. A control deck could have them all in or all out, making it awkward for your opponent to bring in something like Erase. They could have the proper sideboard card for it, but you can potentially blank those cards by not having it in the deck.

The big question of how viable Myth Realized is hinges on how much enchantment removal and bounce sees play in the format you want to run it in. Hopefully a cool card doesn't get hated out and fails to find a home. 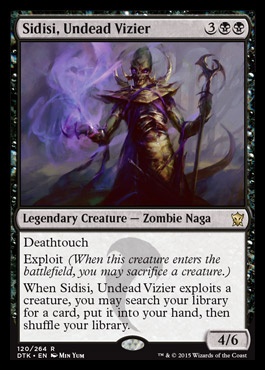 Here's what I wrote previously on Sidisi, Undead Vizier.

A slightly more expensive Diabloic Tutor isn't much to write home about, but it doesn't take much either for this card to be way better than that. Whether it's with recursion, sacrificing tokens, or finding other creatures to sacrifice for value, Sidisi, Undread Vizier starts looking pretty insane.

Basically the more this card approaches 4/6 deathtouch and draw your best card for five mana the better it looks. Hell, in an ironic time paradox, Sidisi, Undread Vizier plays pretty well with her former self Sidisi, Brood Tyrant as the later makes lots of zombie fodder for the former to exploit. I could see Sidisi, Undread Vizier finding a nice home in the Satry Wayfinder/Whip of Erebos decks.

That said, the Diabloic Tutor effect will certainly be at its best in some kind of combo oriented deck, though the value of drawing your best card, or sideboard card after Game One, can't be understated. The 4/6 deathtouch body isn't too shabby either, it eats everyone's favorite bench test Siege Rhino. This will certainly see some Standard play, and Commander decks were already running Rune-Scarred Demon. 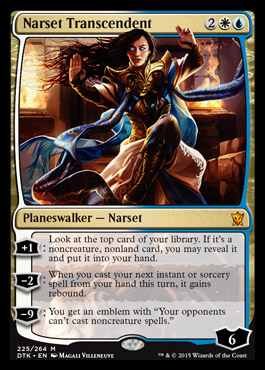 While opinions have cooled a little since Narset Transcendent was first spoiled, she's still undeniably powerful. There's a reason she is the most expensive card in the set. What's interesting with Narset Transcendent is how WotC has managed to balance the card around an axis we don't typically see out of planeswalkers.

Narset Transcendent has really high starting loyalty for her cost, most every other four casting cost planeswalker comes in with three or four. So even though none of her abilities protect herself, she does have some innate defense in being able to soak a hit. There's been more than a few jokes about Narset Transcendent taking a jab from something like Wurmcoil Engine and surviving if she used her plus ability. "That all you got?"

This also means she threatens to ultimate really quickly. However part of her balancing comes from the fact that while her ultimate is good in the right match-ups, it wins the control mirror, it's not as game ending as some ultimate tend to be.

So the real core of Narset Transcendent is her +1 and -2 abilities. Her +1 requires some very specific deck building to maximize and has been compared a lot to Domri Rade, but for spells instead of creatures. Her -2 has a lot of potential for abuse and some nice synergies. It doesn't work well with a heavy counterspell deck, but you do get to double up on removal spells and card draw as long as you're willing to wait on the them. It's even pretty decent with wrath spells since it forces your opponent to likely not play any creatures the next turn. 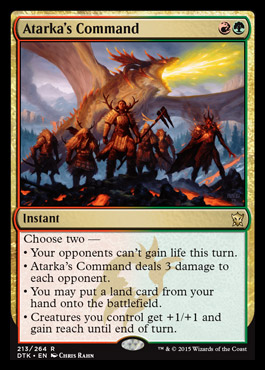 So you're telling me it's a better Skullcrack?

In Magic cheaper casting cost is better, in general. You don't want to fall behind your opponent and many match-up come down to who can start making more than one action a turn. Though cheap doesn't always mean good, *cough* *cough* Tibalt, the Fiend-Blooded. However at two mana, Atarka's Command was virtually assured a certain threshold as long as the effects we decent since it makes two actions for one spell so cheaply. 'Your opponents can't gain life this turn.'and 'Atarka's Command deals 3 damage to each opponent.' make the floor for Atarka's Command to be basically Skullcrack.

Note that it doesn't have Skullcrack's damage prevention clause though, which is sometimes relevant.

The instant speed mana ramping might help you to surprise an opponent with a crucial spell, but the 'You may put a land card from your hand onto the battlefield.' effect is pretty weak and out of place with the other more aggressively oriented ones. This isn't Rampant Growth, it doesn't get you the land. At best it's an Explore and the second card is always one of these other effects. 'Creatures you control get +1/+1 and gain reach until end of turn.' is the last one and is decent enough as combat tricks go. Where Atarka's Command is likely to make waves is in the very aggressive or burn decks.

For instance, in Modern Burn, which is already sometimes splashing for Destructive Revelry, it's essentially a more versatile Skullcrack. If you have a creature in play you get to effectively make Atarka's Command into a 4 damage burn spell, provided the creature connects. This gets even better if your creatures have prowess or cards that make more than one body. Maybe we'll see a super aggressive RG deck in Standard with Atarka's Command, Goblin Rabblemaster and Monastery Swiftspear.

Sorry, I can't help but cheat a little. Even if Ultimate Price isn't at its best with all the multicolored creatures around, getting solid two mana removal is always a plus. There's a lot of hype that Collected Company and Congregation at Dawn might be the best option for Melira, Sylvok Outcast combo now that Birthing Pod is gone. Watch out for Risen Executioner out of control decks, it wouldn't care about the tribal aspect just that its an threat that can be killed or milled and keep coming back. Living Lore and Mirror Mockery are just too damn interesting from a card design aspect. I'm not sure what they will do, but I hope it's something cool. Sarkhan Unbroken is really powerful, but he matches up a little poorly against the current Standard format. He needs a shift to occur to really shine.