Pro Tour Dragons of Tarkir is nearly upon us. Coverage has already started and goes all weekend. Also, StarCityGames is running their State Championships this weekend. So whether you're queued for the Pro Tour, watching at home, or playing in other tournaments, there's lots of Magic on hand this weekend.

Dragons of Tarkir has only been legal for a few weeks now, but it's managed to shake up the format with a few key cards. I compiled the numbers from the Top 8s of the recent major tournaments to give you an idea of what Dragons of Tarkir cards you can expect to see. It turns out you should probably be playing, or be prepared to play against, Red. 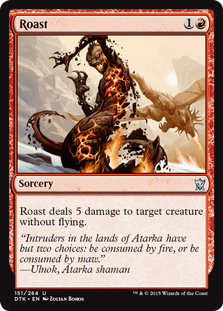 While Roast didn't quite make the list, when combined with the sideboard numbers it reaches a staggering 30 count, which makes it worth an honorable mention. Sure, it can't hit flying creatures and is pretty dead against control, but five damage kills pretty much every other creature on the ground. It's just an extremely efficient way to answer creatures like Siege Rhino or Courser of Kruphix, which have such high toughness that direct damage red spells typically have trouble dealing with. 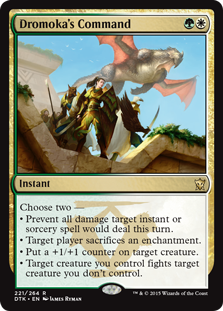 Well the numbers are in and Dromoka's Command has taken the gold for the most played in the Dragons of Tarkir command cycle. Atarka's Command wasn't too far behind, though Dromoka's Command could pick up a few more from the sideboard numbers as well. Dromoka's Command gets the distinction of being the only non-Red card on this list. If you caught some of the early coverage R&D admitted that they added Dromoka's Command as tournament level enchantment removal to push out some of the Theros block cards. It also adds decent creature removal to a color pairing that doesn't normally get it. On top of all that the blowout potential is just really high on this one. If you can blank a Stoke the Flames and fight a creature, I'm not sure how you lose that game. 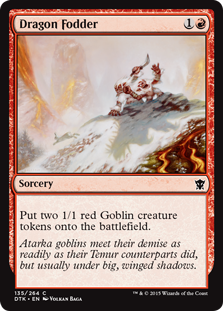 Red got some nice new tools in Dragons of Tarkir, though to be fair Dragon Fodder is an old reprint first showing up in Shards of Alara. These goblins are really only getting devoured in flavor rather than an actual mechanic, but there are still plenty of Red decks that want to go wide. Dragon Fodder helps to insulate against cards like Wild Slash that might otherwise be really good at exchanging with your Red aggro deck. It can also synergize nicely with Jeskai Ascendancy and Goblin Rabblemaster. One real drawback however is that if you're also running Hordling Outburst you start to open yourself up for some savage Bile Blights.