A few weeks ago the Escapist Staff gathered round our streaming room table to take part in what our Twitch chat has now forever dubbed "Barbeque Draft", BBQ Draft for short. You can watch the whole draft here. What happened was we wanted to draft a box of Modern Masters 2015 that Wizards of the Coast had sent us to show off the format, but we couldn't quite gather enough people together in the middle of the work day. The solution was to rotisserie draft it instead.

If you're not familiar with rotisserie draft, the basic idea is that you lay out all the cards face up. The first plays takes their first pick from the entire card pool, and then each player goes after that with a snake occurring at the last player to take two cards.

Often rotisserie drafts are done with gigantic card pools, like all of Vintage or Modern, but some of the basic strategies are the same. The first few picks are usually to gobble up the most powerful cards or to plant a strong flag to your opponents of the kind of deck you're drafting. At any point another player could try to screw you over by taking an important card from you, but that also denies them a card for their deck. So usually what plays out is this game of chicken where you're trying to leave cards that only you want for later while fighting over the ones everyone is willing to take. The twist here, of course, is what we're calling a Barbeque Draft: Instead of a limited set, use a full booster box and let the cards fall where they may. You get a powerful pool and some vicious deck setups, but are ultimately limited in power by what key rares and uncommons show up in force. 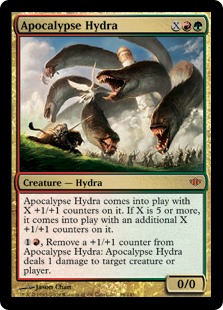 Now I had participated in a few Modern Masters 2015 drafts before this, so I had a pretty decent understanding of the archetypes and their important cards. I've really enjoyed drafting this format, there are some powerful and exciting cards to crack and the archetypes reward reading the draft. A lot of the cards a bonkers in the right deck, but mediocre to unplayable elsewhere. So you can get some nutty draft decks with some amazing late pack picks if no one else is drafting what you are.

I ended up 3rd in the pick order, and my very first pick was actually a Dismember. I wanted to stay open and see where everyone else was going to end up. For the first several rounds Janelle and Jon fought over Blue cards, while Josh had free reign over Red/Black bloodthrist. I started to go towards Green with the potential of Green/White tokens, but Jon ended up cutting some of my Raise the Alarms when he was done contending with Janelle for Blue.

As the draft continued I consolidated myself in a Green ramp strategy. I wasn't certain if I was going to be fully domain or sunburst, mechanics that reward you for playing four or five colors. Domain specifically cards about having basic lands of each type, while sunburst only cares about the colors itself. I ended up opting to keep a stronger core of Green and Black cards, since both Josh and Jon were aggressive decks I didn't want to stumble against, with a splash of Red for Apocalypse Hydra and Savage Twister. Decent removal, ramp, and some of the best threats around? Yep, that's Jund. There's just something undeniably satisfying on filling your deck with just a bunch of good cards. Synergy be damned, I just want to trade with all my opponents early threats and let my more powerful topdecks take over the mid game. 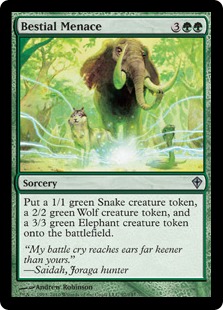 Game one Jon was able to get off to a fast Affinity style start. This was why I had designed my deck to be more strongly two colors because I knew I would need to be able to keep pace with these kind of draws. With so much evasion in his deck, the game ultimately came down to the race. The key play besides Jon playing a Glint Hawk on Turn 2 that I don't think he ever needed to use White to activate, came down to me using a Dismember on a Myr Enforcer instead of the Glint Hawk. I wanted to be able to untap, attack him low, and Savage Twister most everything away. A few turns later I died to that Glint Hawk.

Games two and three were much more in my favor with the deck preforming exactly as planned. I would spend and early turn or two ramping, and then just keep playing high impact cards every turn. I was a little worried about counterspells after sideboard and my Precursor Golem always seemed to find a removal spell. But I'm pretty certain I played Bestial Menace and Creekwood Liege in both games, and that's an ungodly amount of power and bodies to put into play for only two cards and nine mana.

Also, Tarmogfy is usually pretty anemic in draft, but he's a beast when you're Nameless Inversioning Lodestone Golem - which gets you tribal, instant, artifact, and creature in the graveyard to grow.

While Josh went virtually uncontested in the draft portion, sans the Nameless Inversions I snagged away from him, I actually just think the Red/Black bloodthrist pool wasn't terribly good. I've had more Vampire Lacerators in smaller booster draft pools, and there weren't a lot of Lightning Bolt and Burst Lightnings either. So his deck wasn't able to get off to that punishing of starts nor was it able to reach for those last few points of damage well either.

There's a pretty common strategy when it comes to Magic, you always want to be the slightly slower deck. As long as you're not so slow that they can go underneath before you have a chance to deploy all your cards, you want to be the deck that's a little on the backfoot but will play bigger and better cards. This is pretty much exactly how I imagined this match-up, granted it certainly helped that Josh got a little flooded on mana both games. On Games One and Two after some initial aggression my bigger Green creatures and removal stabilized the game, while 10/10 Apocalypse Hydra and Pelakka Wurm went over the top to close out the games.

Remember what I said about wanting to be the slower deck? Well much like I designed my deck to prey on the little aggressive decks, Janelle's graft deck was perfectly placed to punish mine. Her deck had all the inevitability, in addition to some card draw, and my deck was poor at putting early pressure or especially evasive threats into play. Value cards like Bestial Menace aren't terribly great when a Thrumming Birb is pumping her team every turn.

Game one I had to mulligan and ended up keeping a ramp heavy hand as my deck still needed to get off to a fast start in order to win. A few turns later I had tons of mana in play but didn't draw enough threats to contend with Janelle's every growing creatures. A Helium Squirter sealed it up since I was no longer even capable of drawing to the Savage Twister since chump blocking stopped being an option. Game two went similarly; I got in a few early hit but eventually Janelle locked up the ground. Despite the monetary difference, Tarmogoyf can still get outclassed by a Aquastrand Spider in the right circumstances. To her credit, Janelle played the second game excellently, aggressively trading off creatures to Bestial Menace tokens to have enough time to play out her whole hand.