Over the last weekend, many of you were probably cracking prerelease boxes of Magic Origins. I ended up judging way more events than I played in, but my two-headed giant experience did involve some hilarious shenanigans with two Flameshadow Conjuring along with some Fleshbag Marauders. See also casting Fleshbag Marauder when my team had ulted Liliana, Heretical Healer. Yes, it's all mine! Muhahaha.

My megalomaniac tendencies aside, and before the set officially launches. The Escapist got the chance to bounce some questions off of Shawn Main, a Senior Game Designer at Wizards of the Coast. Magic Origins is the last core set before Magic shift into a new block structure, and we were interested to find out what challenges this placed on the design for it to give core sets a fond farewell as well as transition us all into a new direction. 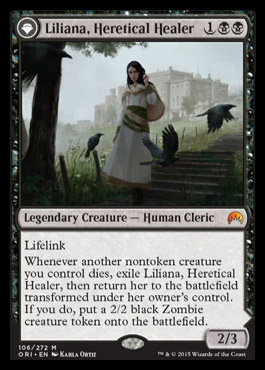 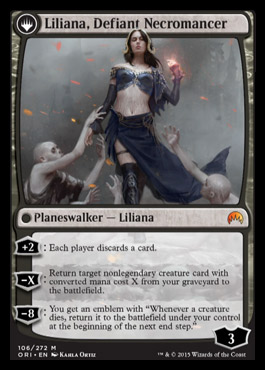 The Escapist: Obviously the double sided planeswalkers are a huge highlight of Magic Origins for their mechanical storytelling. Where did the idea start for bringing back double-sided cards?

Shawn Main: It started with a joke. Magic Origins had recently shifted its focus to be about these five Planeswalker characters and we were in a design meeting trying to figure out how to express those spark moments on cards. Someone said the most ridiculous/crazy/over-the-top thing he could think of. Instead of laughing, the rest of us looked around and nodded because it felt so perfect.

The Escapist: Magic Origins has done some spring cleaning of keywords - removing problematic ones and adding some new evergreens. How did you come to these decisions?

Shawn Main: R&D spends a lot of time talking about the color pie, which is how we divide up different game mechanics by color. We had a number of plans for minor improvements that had been accumulating and this seemed like the perfect opportunity to put them into action.

Blue was particularly desperate for a combat mechanic that wasn't just another way to make its creatures hard to block. When we made Prowess for the Jeskai during Khans of Tarkir, we realized we had a really fun, easy-to-understand mechanic and the rest of the game would benefit if we just kept using it.

Red, conversely, was short on ways for its creatures to press through board stalls to deal damage, so Menace was a great fit. And scry was simply a mechanic we wanted to put in every set, we decided we should stop looking for excuses and just give ourselves permission to keeping using it. 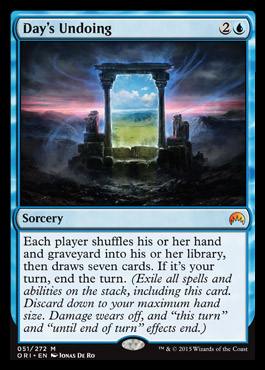 The Escapist: There are a lot of connections and callbacks in Magic Origins to older cards - like Day's Undoing/Timetwister, are there any other cards you'd love to revisit?

Shawn Main: It's always fun to play with fire and revisit things that were fun, but too powerful or problematic in the past. Cards I would love to recreate? I have a soft spot in my heart for Warp World (don't we all?).

The Escapist: Were these callbacks cards part of a deliberate design for Origins, or did they spring up more naturally?

Shawn Main: They sprang up naturally. Every set has at least one round of "hole filling" when the development team has killed some cards and everyone has a chance to add designs that would fit into the open parameters. Day's Undoing comes from that process and immediately delighted and terrified everyone.

The Escapist: What were some of the hurdles and challenges for designing Magic Origins?

Shawn Main: The most challenging part of Origins design was figuring out what to do with all the cards that weren't part of Planeswalker stories. The trick was to take the themes of the origins stories -leveling up and growing in power- and apply them to other cards in the set. That led us to the renown mechanic, where you have a specific quest to make your creature more powerful, and spell mastery, where you the player are leveling up through casting more spells.

The Escapist: In a recent article it was revealed that the original theme, before it became Origins, was villainous planeswalkers, will we ever see this in a later set?

Shawn Main: Oh! Can I be coy? Imagine me sitting back and petting a white cat. "Would you be interested in seeing such a set?" 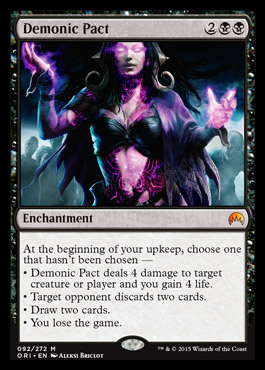 The Escapist: What's your favorite card from the set and why?

The Escapist: In my opinion one of the best aspects of Magic is that there are so many games within the game, but how hard is it to ensure that sets have pushed cards for constructed, appeal to the different psychographics, and sweet stuff for Commander, while still ensuring a balanced limited environment?

Shawn Main: Rarity is a powerful tool for making different formats work. Commons and the bulk of uncommons are focused on making draft and sealed work, while every rare and mythic runs through a gauntlet of different players and decks to make sure someone is going to love the card. And it helps that R&D is so full of different types of players - I know who to go to if I want a sweet, flavorful design and who to check with to see if a giant green creature is exciting enough or if a powerful card would be fun for tournament players.

The Escapist: Have you done anything specifically with Magic Origins to help bridge Magic into the new block structure and rotation?

Shawn Main: Origins' central task is introducing our most important Planeswalker characters moving forward. I can't reveal yet what the future holds, but we've planted a lot of seeds in the story and cards here.

The Escapist: What was it like designing the swan song for core sets, and is there anything you will miss about core sets?

Shawn Main: Personally, it was a great honor - I entered the game way back during Revised edition and always loved what a melting pot of different settings and fantasy tropes core sets were. Plus Origins was the last chance to do every crazy thing I had ever wanted to do with a core set so it's stuffed pretty full. I'll miss some of the opportunity to do one-off flavorful designs that don't fit into the current setting, but love the story-centric approach we're taking to blocks now. There will be a lot more big picture flavor driving things in the future.