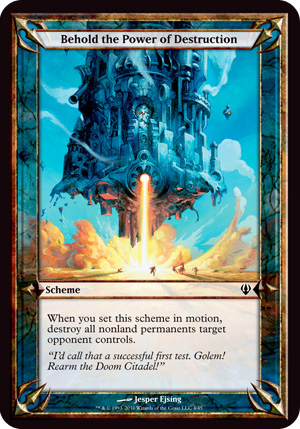 The Escapist: How much does balancing for multiplayer formats factor into recent design? For instance, including more cards with 'each opponent'.

Ben Hayes: While I don't think it impacts that design of most sets, it is something we're more deliberate about now on a card by card basis.

The Escapist: In terms of design, are these sorts of effects considered beneficial to the fun of the format, or are they too "not fun" to play against to be considered for more prevalent inclusion?

Ben Hayes: I think there were some growing pains when we initially started to explore the space and it's a constant learning process as far as where we want to push the envelope on cards like that. As always we'll see how the cards we make are received and try to do our best work with each new set.

The Escapist: Would this cause a new set to steer away from a mechanic if it was found to be inadvertently degenerative in multiplayer? See extort in Gatecrash Sealed 2HG for example.

Ben Hayes: It might cause us to choose a specific implementation of a mechanic over another, but I don't think it would impact the overall direction. Main booster releases are still primarily designed for one-on-one play while trying to be as positive for multiplayer formats as possible.

The Escapist: Commander and 2HG have sort of solidified themselves as the de facto multiplayer formats for constructed and limited. Are you happy with how this has shaken out or what format would you like to see more of?

Ben Hayes: I think Commander and 2HG are great at what they do and I like them both as formats. I see Magic being around forever though, so I expect new formats will continue to show up as people have great ideas.

The Escapist: Along that line, how likely are we to see products in the near future, besides Commander, specifically marketed at multiplayer like new Archenemy, Planechase, and Conspiracy?

Ben Hayes: As I said before, if we think there's an audience for a type of Magic set it's only a matter of time before we talk about making it. 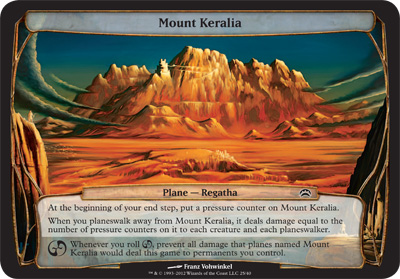 The Escapist: Multiplayer can sometimes exacerbate the gulf between serious and casual players when the groups mindset doesn't line-up - often leading to arcane house rules. Any thoughts to combating this problem in the future or is the emphasis on fluidity the intended solution?

Ben Hayes: I think each group is going to be best at knowing what's best for them and people interact with Magic on many different levels, making it difficult for one solution to be effective, though we hope that groups can focus on helping each other to have a good time while playing. Richard Garfield himself has talked about how a group dynamic can be fun when players are trying to outthink each other.

The Escapist: While team sealed GPs sort of fill in, are multiplayer formats ever going to return to the GP and Pro-Tour circuits? Likewise, will there be any more support for multiplayer at a more local level?

Mike Rosenberg [Content Specialist for Organized Play]: While we have no plans for a team Pro Tour at this time, we are always looking at opportunities to incorporate what players want in our Organized Play programs. In the meantime, we currently offer a few Team Limited Grand Prix each year, with five in 2016, as well as the World Magic Cup, a team event that gives over 70 countries the chance to play on one of Magic's biggest stages. In-store programs allow us more flexibility on offering team formats that cannot be adapted to Premier Play. For in-store multiplayer support, the next set, Oath of the Gatewatch, is designed to work better than any other expansion with the Two-Headed Giant format, and stores are encouraged to run at last one Two-Headed Giant event at their Oath of the Gatewatch Prereleases, which take place the weekend of January 16, 2016. There are also plenty of side-events during tournaments that fans can play 2HG at.